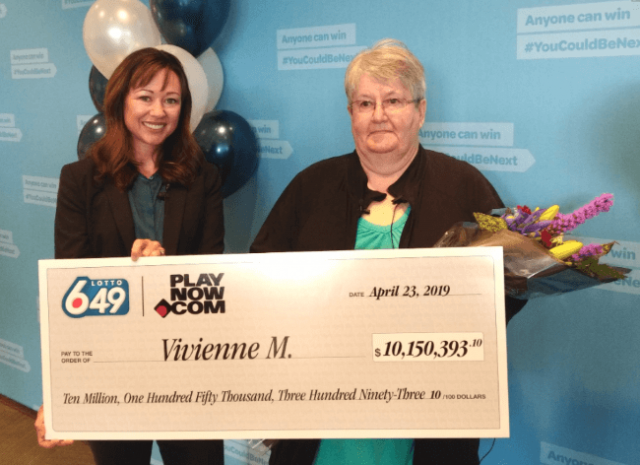 Winning the Lottery was probably the very last thing that long-time Tumbler Ridge resident and grandmother Vivienne Mills had seen coming. It was in fact such an unlikely thought to Vivienne’s mind that, upon having opened the email from PlayNow.com announcing that she had won $10 million, she had initially understood the email as saying that she’d won 10 cents! Vivienne recalls that it had taken her eyes some minutes to focus on the many zeros, and that even then; her brain did not quite know how to process the exciting information.

The 35-year Tumbler Ridge resident describes herself and her family as simple folk, down to earth, and not at all given to extravagance. She said that despite the realisation that some things would inevitably change because of having won the money, it was important to her that her family remained down to earth and grounded.

Vivienne remembers how even after Lottery operator Lotto 6/49 had confirmed that the email was in fact legitimate and that she had really won millions in cash, she still had trouble believing that it was true. It was a feeling of things like winning the Lottery not generally happening to ordinary folk.

And yet, when considering the identities of recent winners, its more often the people who describe themselves as such that end up winning big; rather than the other way around. Vivienne plans to give some of the money to her children and grandchildren, and also some to her and her husband’s siblings.

Vivienne’s husband had worked as a driller for most of his life, and she herself had been employed in accounting and reception positions.

There Will Be No Reckless Spending

In addition to dishing some of the money out to their loved ones, Vivienne has also said that she plans to buy a smaller car. As it stands, she drives a large truck and wants to drive something smaller. Buying a motor home is also part of the plan for the winnings.

But, said Vivienne, what she wanted most of all was for everyone to just remain the same as what they have been, and for nobody to be changed by the prospect of riches. Vivienne also said that herself and her husband had never been ones to make rash decisions and that they have been following a similar protocol since having learnt of the Lotto win.

Get YOUR hands on a LOTTO win! Play online and see if YOU can be an instant millionaire!