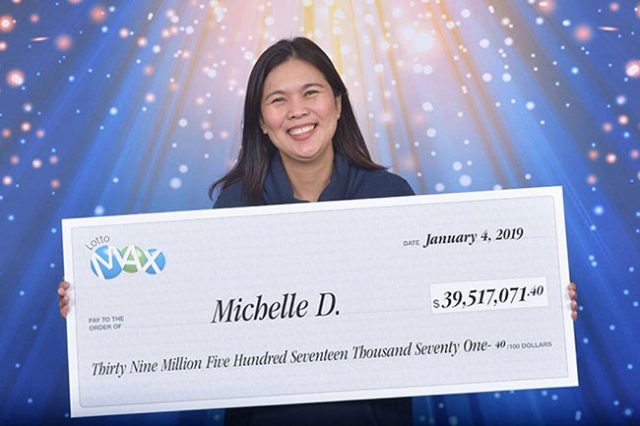 The new year has already brought a few sizable lotto wins to lucky players across Canada. Most recently, a well-deserving mother of three in Surrey, British Columbia managed to swing the odds in her favor and cash in on her very own multi-million dollar windfall.

Michelle De Roma, the mum in question, was out shopping in south Delta on Boxing Day (December 26) when she decided that something was missing from her shopping bags. A lottery ticket, perhaps? She decided to pick up a Lotto Max ticket on her way back home on a hunch.

De Roma’s decision turned out to be a very good one indeed. Thanks to her spontaneous purchase of something that she does not often indulge in, the Canadian winner can now afford to go on shopping sprees far more often. And forget regular stores, too – perhaps Prada, Louis Vuitton and Stella McCartney might be more fitting for a millionaire.

Late last week, the fortunate punter visited the BC Lottery Corporation’s offices in Vancouver. It was there where she was officially named the winner of the Lotto Max jackpot, and given a massive check for $39.5 million. Media photographs of the occasion show De Roma with possibly the largest grin she’s donned in her lifetime!

Commenting about her fortune at the time, Michelle revealed that it was her husband’s birthday, so the jackpot came as the perfect gift for him. Elaborating further, she told media personnel that her husband is the ‘number one love of [her] life’.

De Roma, who as mentioned above is a mother of three, currently lives with her family in Surrey, but that might not be the case for long. The winner is planning to spend a portion of the windfall on a new house for the family of five, and is also planning a dream vacation. Currently, there are a number of destinations on her list, but one in particular stands out.

LOTTERY NEWS: Perks and Perils of Sharing a Lotto Win

A Trip to Rome on the Horizon

According to what she told press reports, Michelle really wants to visit Rome some time in the near future. She is particularly eager to see St. Peter’s Basilica with her mother in law, and will add destinations to her travel list as she goes along. Reportedly, the winner also wants to invest a considerable sum of her newfound money into real state purchases.

Once she had discovered that she had managed to match all 7 numbers on her ticket, she immediately hid it away in a secure place for safekeeping. Speaking about the unforgettable event, she admits it putting it in a confidential envelope with all of her other important documents, and signing it the minute she discovered she had won huge too!