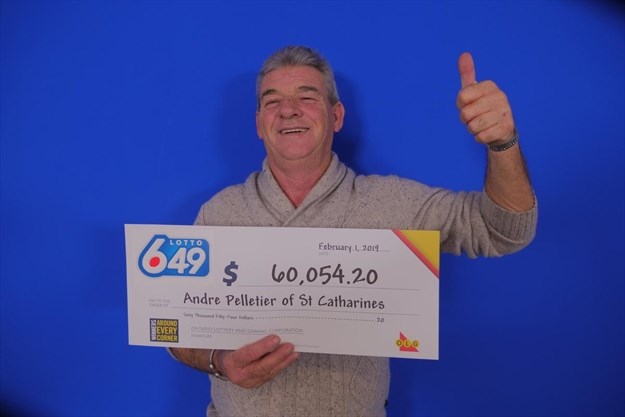 The golden rule to remember when playing the lottery is that absolutely anyone, anywhere stands a chance to win huge. It doesn’t matter where you are from, what you do for a living, or which lucky numbers you decided to pick on your ticket; if you have one, your chances of scoring a jackpot are as good as anyone else’s!

Proving this philosophy perfectly is the latest lotto win to come out of Canada. A truck driver and golf course green keeper from St. Catharines, Ontario, has found himself more than $60,000 richer after taking a chance and buying a slip of his own. The punter is now planning to renovate his home and take a trip to one of his bucket list destinations after scoring the Lotto 6/49 prize.

According to the Ontario Lottery and Gaming Corporation, Andre Pelletier (the winner in question) got lucky in the January 16 draw. Speaking about his luck to OLG officials while he picked up his massive cheque at the prize center based in Toronto, Pelletier noted that it feels nice to have won something. While he does buy the odd instant ticket for Lotto 6/49 and LottoMAX, he said, this is his first big cash win to have come from his efforts.

The gold-coated ticket and key to Pelletier’s fortune of $60,054.20 was bout at the Real Canadian Superstore in St. Catharines, which is situated on Louth Street. According to the punter, he had just finished doing his grocery shopping for the week when something told him that he should make one last purchase, just in case.

The Third Time’s the Charm

In fact, Pelletier decided that he would buy three tickets that day to boost his chances even further. A little while later, he checked all three – and while the first and second slips were non-winners, the third one revealed a cash fortune that instantly changed his life for the better! The player admitted to the OLG that he was trembling as he found out.

The father of four and grandfather has been hard at work figuring out what to do with his new cash since. He says that he plans on revamping his kitchen, replacing the floors, upgrading his recreational trailer, and doing some other important renovations around the house. As for the rest of it, he will be putting it safely in the bank until he can take a trip to a destination he has always wanted to see.

According to the Ontario Lottery and Gaming Corporation, since the Ontario Lotto 6/49 was launched back in 1982, Canadian punters have won more than $12.4 billion in jackpots.

Are YOU the next big winner? Play the slots and you just might be!