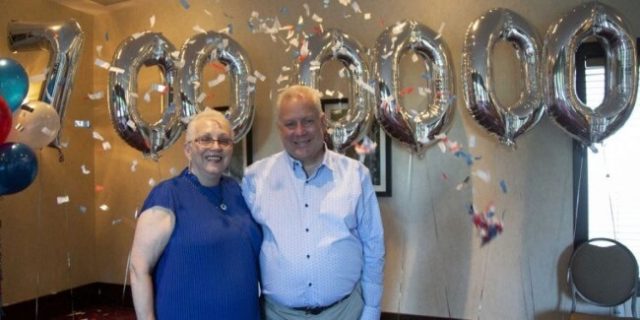 Its not exactly the norm to hear shouts of abundant joy coming from your local pharmacy. And yet, this was the very scene that recently played itself out at a local pharmacy in Gatineau. There was just no stopping the shouts of glee when pharmacy worker Colette Laberge discovered that she and partner Mario Lafreniere had won CA$7 million thanks to their having purchased a ticket for the July 10 Lotto 6/49 draw.

The lucky duo played the numbers 7, 15, 22, 28, 43, 49 and also the bonus number, which was 45. Mario and Colette later revealed that they had purchased their golden ticket from the Uniprix Danyel Dessureault, Place de la Cite-des-Jeunes. Laberge recalls having been notified by one of the pharmacy’s customers that Loto-Quebec had just revealed that one of the winning tickets for that day’s draw had been purchased somewhere in Gatineau. This prompted Laberge to make instant work of checking her and partner Lafreniere’s ticket, which was right about the moment that the lucky player discovered that life as she knew it was about to change forever.

They’ve Planned It All!

According to the rules of the operator, Uniprix, being the outlet from whence the winning ticket was bought, will stand to benefit from the jackpot too. CA$70,000 will be paid out to Uniprix, being 10% of the size of the jackpot.

As for the lucky couple’s plans with regards to spending newly acquired fortune, they have apparently wasted no time methodically and meticulously planning what they intend to do with their winnings. A big part of their plans for the future involves taking good care of their family thanks to the money awarded to them by Loto-Quebec.

The operator has been having a busy time of it spreading the joy. Just ask Richard Sobkowicz from Napean. Thanks to his having purchased a ticket for the Lotto 6/49 draw on July 3rd, the Napean retiree managed to really boost his retirement savings, and by as much as a whopping $15.8 million. Sobkowicz purchased his lucky ticket from a local Petro Canada.

Notable is the fact that Lottery winners are to be found in all walks of life. The only condition for winning the jackpot, is buying a ticket; and tickets are generally very reasonably priced. The Lottery is no respecter of persons or class and this is part of what makes it so special all over the world.