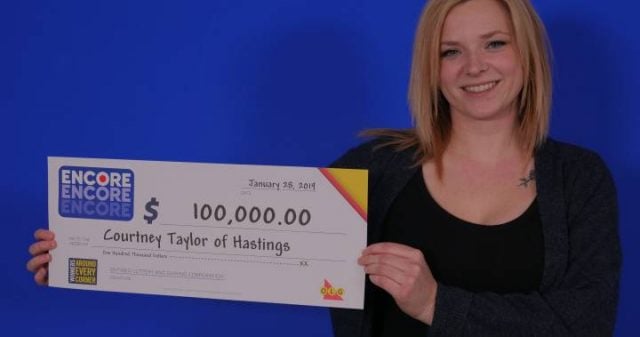 The list of big lottery wins is seemingly never-ending in Canada. Most recently, one fortunate woman from the town of Hastings in Ontario managed to strike it rich with just a single winning ticket and a generous helping of luck!

Hastings is a small village just 35 kilometers southeast of Peterborough. However, despite its petite size, the region has still managed to go down in history as the site of a sizable win, showing that virtually anyone, anywhere can hit the same kind of fortune should the universe be smiling down upon them.

Courtney Taylor, a 24 year old Canadian resident, has kicked off her new year with an impressive $100,000 lotto prize in the aforementioned town. She scored the enviable jackpot in the January 26 Encore draw, which is part of Lotto 6/49’s wide range of premium gambling products.

Miss Taylor managed to match six out of the seven total numbers drawn to bag the aforementioned cash jackpot. She even managed to select her digits in the exact same order as they appeared in the draw in an additional stroke of good fortune.

Speaking about her windfall to local officials, Taylor revealed that she discovered that she had won big by using the Ontario Lottery and Gaming Corporation’s dedicated app. She checked the mobile app while in her car, and after validating her numbers, she was virtually jumping for joy.

She even admitted to crying and laughing hysterically upon her discovery while accepting her $100,000 prize at the OLG’s Toronto-based Prize Center. Of course, most big winners do exactly this; jumping up and down, crying, shouting and calling their loved ones to celebrate the news that has just changed their lives.

Plans for a Scottish Adventure

Taylor, who currently works as a courier in Ontario, is reportedly planning to use her winnings responsibly now that she has them in her grasp. She intends to pay off a few bills and debts with some of the money, and will be adding the rest of the funds to her savings account for a rainy day.

But it’s not all bills and obligations for Canada’s latest lucky punter. She is also heading off to Scotland with her boyfriend soon, and the windfall will surely come in handy when the time calls for some spending money. Speaking about the jackpot, she says that she feels like she’s ‘sky-diving out of an airplane’, and has been experiencing ‘all the feelings in the world’, in her own words.

Encore is a $1 lotto competition that runs in conjunction with most of the OLG’s regulated gambling games. Taylor bought her winning slip at a Petro Canada branch on Rossland Road in the Durham Region town of Whitby.

There’s loads to be won on slots! Why don’t YOU play?