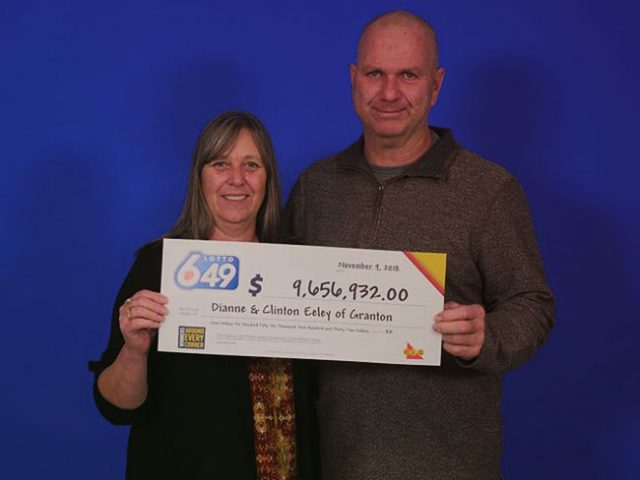 It was just under two weeks after the Ontario Lottery and Gaming Corporation (OLG) revealed that the winning ticket for its November 3 Lotto 6/49 jackpot worth $9.6 million had been sold in London that a thrilling announcement was made.

It was then when the provincial operator broke the news that Dianne and Clinton Eeley, a couple from the small community of Granton just north of London, had struck the life-changing win. Although she has been buying tickets every Thursday for a few years now, Dianne (56) has admitted that she never really thought that herself and her husband would win so big.

Commenting on the couple’s fortune, the wife of the pair noted that winning was certainly a possibility in her mind. However, a prize of this size had reportedly never even crossed her thoughts. She laughed, adding that the most that her and Clint had ever won was $100 – or a couple of free tickets.

Nobody Believed the Good News

It took a couple of days before the Eeleys eventually realized their luck. They didn’t check their ticket initially, which had been bought at a Petro Canada station on Dundas Street, until a week or so after the draw. Dianne couldn’t believe her fortune, she said, and Clint found out a few hours later. The duo later confessed that nobody believed them when they told them that they had won!

The extremely lucky pair, who are also the owners and operators of an HVAC business and have three children and six grandkids, have taken home $9,656,932 in total. However, resignations don’t seem to be on the cards for these two just yet; despite their massive win, both of the Eeleys were back at work as usual the following week as though nothing had happened.

Back to Business as Usual

Dianne believes that now, everything will continue as per usual. When you have as many employees as HVAC does, she noted, you can’t just leave at a moment’s notice. The couple is reportedly planning in invest more in their business, share their windfall with their family, and pay off the mortgage on their house.

According to the pair, they also have not really been able to start processing the magnitude of their win. Thus, they still haven’t decided on a treat to purchase for themselves, but are certainly working on a few ideas. In Dianne’s words, they are sure ‘there will be something’, but no big decisions have been made just yet.

Since making its debut in June of 1982, OLG Lotto 6/49 players have won in excess of $12.4 billion in cash prizes. This figure includes an unbelievable 1,364 jackpots, and no less than 254 $1 Million Prize draws, according to the Ontario-based operator of the services.

If you don’t play, you can’t WIN! See if you can win big online NOW.