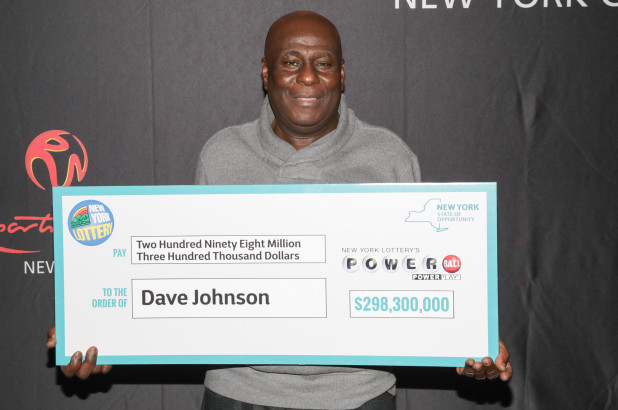 On January 26, one extremely lucky Jamaican man became an instant multi-millionaire. The Jamaican-turned-US resident became the winner of the second biggest Powerball jackpot in the history of the New York Lottery, claiming an unbelievable $298 million in one fell swoop!

The winner of the life-changing prize is 56-year-old David Johnson, a truck driver from Brooklyn. Johnson left Jamaica at just 16 years old in pursuit of a better life, settling down in the Big Apple with his family shortly thereafter.

Johnson bought his lucky lotto ticket on December 26 last year, choosing the numbers 5, 25, 38, 52, 67, and bonus ball 24. Once he had discovered that he had won the jackpot of a lifetime, the man chose to take a single lump sum payment of $180 million. According to a statement from the New York Lottery, this payment came to $114 million after taxes.

A $5 Ticket Turns Into Millions

Johnson officially collected his winnings and an over-sized check late last week at Resorts World Casino in Queens. Understandably, the Jamaican native was all smiles as he was interviewed by countless members of the press as New York’s latest overnight millionaire.

Speaking about his fortune, the winner revealed that he didn’t have to travel far to purchase his slip. He bought the ticket in question for just $5 across the street from where he worked at Arnold’s Service Station on Linden Boulevard. According to Johnson, he had no idea that he had won the jackpot until a co-worker alerted him to the fact.

He says that a friend of his and fellow driver for his company called him to tell him that someone had won the Powerball ‘by the gas station’. Johnson admits that he turned to himself and told himself that it couldn’t be him, as he just wasn’t lucky enough for something of that magnitude.

Plans for Investment and a Porsche

The player still did not check his ticket until his colleague called him again, urging him to have it validated. Even then, he didn’t realize his luck until two days later, while he was on his way to work. He says that he went to the retailer he bought the slip from and gave it to the clerk to check… and was told “Congratulations!” once it was scanned.

As he needed to see for himself, he looked at the screen and saw BIG WINNER emblazoned across it. He immediately started jumping up and down in the store when he finally realized just how much he had won, and was quick to contact an attorney to help him invest his fortune and take good care of his family.

Of course, Johnson has some more fun-filled plans for the cash, too. For starters, he plans to buy the red Porsche sports car he has had his eye on for years. His win has marked the third consecutive Powerball jackpot score by a New Yorker in 2018 alone!

Want to be a MILLIONAIRE?
Play the best loved casino games and see if you can make your dreams happen!