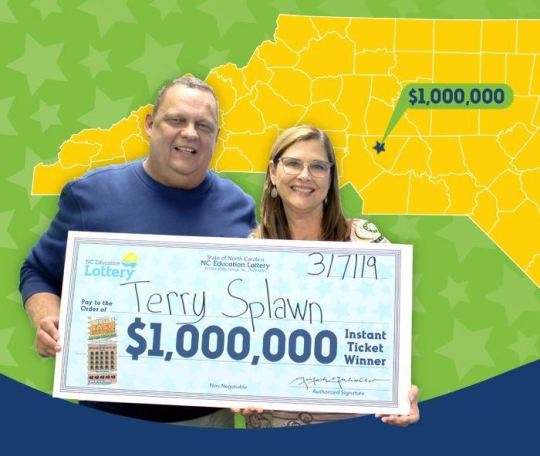 It’s an argument in favour of the belief that some people are in fact born lucky. Well, either that or Sam’s Mini Stop in Concord is somehow founded on luck itself. A lucky player Concord in North Carolina could not believe his eyes when on Wednesday, thanks to a winning ticket purchased from Sam’s Mini Stop, he hit the $1 million Lottery jackpot.

But surely it’s not that unusual to win a Lottery jackpot is it? Perhaps not, but Terry Splawn had managed to win the Lotto not only once, but twice! And the best and most interesting bit? Both tickets had been purchased from Sam’s Mini Stop; the last time round having been back in 2017, almost two years ago.

Splawn To Hold On To This Round

Splawn remembers experiencing a sensation of complete unbelief at the time of having been notified that he had won – again! He remembers thinking to himself that this (the win) can’t be happening and that the odds were just too incredible to bet true.

Our winner has decided that this time round, his winnings will be put to good use by going into a savings plan in case of a rainy day. The previous winnings, says Splawn, were spent on home remodelling and improvements by Mrs Splawn.

It seems that this time round, Mr Splawn will be keeping close tabs on his newfound windfall. After taxes and levies, a total of $424,506 will be paid out to the player. He was given the option of choosing to receive the money all in one go as part of a lump sum, or alternatively, to receive annual annuity pay-outs totalling $50,000 a year.

Most players end up going for the cash and Splawn is no exception.

It’s Different For Everyone

The lump sum, as well as the monthly payments options both serves the same purpose at the end of the day. The only difference between the two is the tax-relief associated with the money allowance option.

But it’s up to each player to decide what works for him or her on a personal level.

Want to change YOUR life in an instant? Play the jackpots at Spinland TODAY!