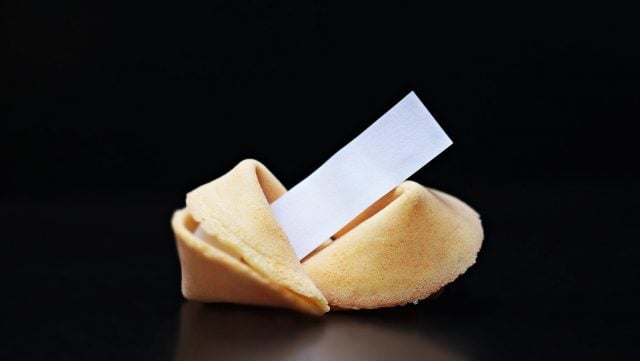 It’s a good thing Ronnie Martin pays attention to what Confucius say, because playing the lottery numbers from a fortune cookie won him a cool $1 million jackpot. The Pennsylvania man said he broke open the crisp, sugary confection years ago, and has played the numbers ever since.

Martin said he bought the ticket that won him a share of the $543 million Powerball prize at the same place he always buys his ticket – a fuel station he passes every day on his way to and from work. He used the self-serve scanner to check his ticket, but instead of one of the usual messages, the one he got told him to see the clerk.

When he told Gary the clerk, he replied that he must have won something, and checked his numbers. Gary told him he had a million-dollar ticket, but Martin, in disbelief, told him to check it again. It was true – he had just become a millionaire.

Martin’s big win was not the first time that playing lottery numbers from a fortune cookie was the right thing to do. In June, a Virginia couple said the numbers that won them $100,000 came from a cookie.

In 2005, manufacturers Wonton Foods Inc. was investigated briefly by authorities after 110 Powerball players won a collective $19 million when they used numbers from the confections.

Made from flour, sugar, sesame oil, and folded around a piece of paper bearing a prophecy and lucky numbers, fortune cookies are popularly thought of as Chinese in origin. Actually, they were created in the good old US of A, and were inspired by a similar Japanese tea cake made with miso and sesame.

Who made the first modern cookie, however, is disputed. One story is that San Francisco’s Golden Gate Park Japanese tea garden’s Makoto Hagiwara first served them in the late 1800s or early 1900s. Another is that Los Angeles-based Hong Kong Noodle Company founder David Jung created them in 1918. The third story is that Seiichi Kito, founder of Fugetsu-do in Los Angeles’ Little Tokyo, invented them after being inspired by cookies sold at Japanese temples.

Approximately 3 billion fortune cookies are manufactured annually worldwide, with most of them destined for the US. New York’s Wonton Food Inc. alone produces more than 4.5 million on a daily basis. Next time you get one with your Chinese take-out, don’t simply make the In Bed joke when you read your fortune. Take note of those lucky numbers, because Confucius seems to know what he’s talking about.

Could YOU win? Try your luck at Bingo today!