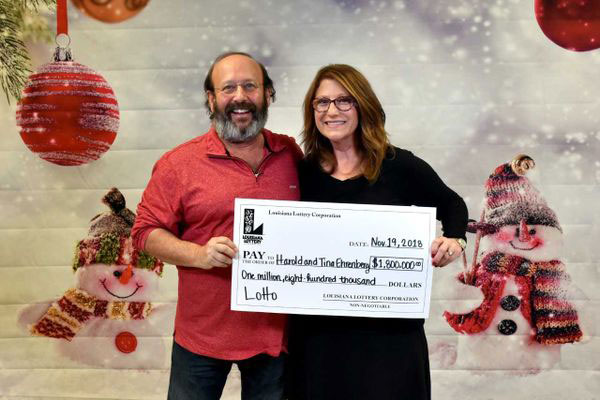 A couple over in Louisiana, USA, have discovered just how lucky they really are after finding their winning lotto ticket mere weeks before it was set to expire.

The pair is now significantly wealthier than they ever could have dreamed of – and it’s all thanks to them getting stuck in during a cleaning session at home! It was while they were sprucing up their home that they found the lost stub, which managed to earn them a life-changing win just in time for Thanksgiving.

A Rewarding Clean Up

According to wife Tina Ehrenberg, she found a stack of ticket sitting on her nightstand while she was doing some cleaning around her home. She had busied herself with a broom and a cloth in hand just before her family was set to arrive for their American holiday, and almost missed the inconspicuous pile of papers placed beside her bed.

Most of the tickets, she said, were non-winning. However, the last one in the pile was very different, instantly earning Tina and her husband an incredible $1.8 million jackpot! As mentioned above, Tina revealed that she found the stub just two weeks before it would expire, potentially leaving her to mourn a lost fortune for the rest of her life.

The ticket was from the Pelican State’s June 6 draw, and had to be claimed within six months of the draw date according to local laws. According to husband Harold Ehrenberg when speaking to the Louisiana Lottery Corporation, he and his bride kept checking the numbers over and over once they realized that they had won big.

Harold also confessed that throughout the entire process, he kept expecting ‘something to go wrong’. Luckily, nothing did, and the pair was able to officially claim their prize at the LLC’s offices in a joyful ceremony, giant check included.

The couple hail from the town of Mandeville, a small community just 75 miles east of the Louisianan capital of Baton Rouge. After state and federal tax deductions, they took home around $1.3 million in total, and say that they are now planning to put their jackpot away to make their retirement significantly more enjoyable by the time it swings around.

In Tina’s words, the couple don’t have plans to ‘buy anything crazy’ or go on any luxurious vacations. There are no new houses, beach condos, or sports cards on the cards for the lucky duo – in fact, the part that they are most looking forward to is depositing their check into their investment account!

Want to get RICH? Play Bingo online and see if you can win!