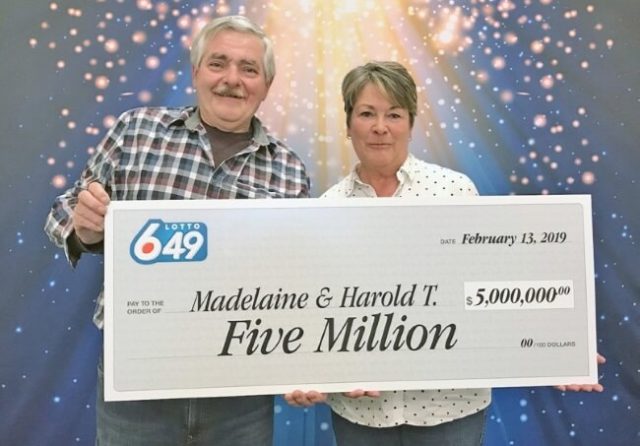 A classic 1966 Jaguar XKE has the name of one half of a very lucky Port Alberni couple written all over it. Harold and Madelaine are now able to turn their wildest dreams and desires into a reality because the Port Alberni couple are the latest additions to a long line of Lottery millionaires to have been created in Canada this year.

Madelaine, unlike husband Harold, isn’t interested in acquiring new and shiny things and even prefers to remain living in the couple’s current home, because to the lucky winner, its warm and cozy and familiar. She does however intend to make life a great deal easier for the couple’s children and grandchildren.

All 6 On The Money

Harold and Madelaine secured their win by having correctly predicted all 6 wining numbers during the run-up to the February 9 Lotto 6/49 draw. The winning ticket was purchased from the A-1 Convenience Store located on Redford Road. The retail outlet location is worth noting too as the store in question will also be receiving its own award for having sold a winning jackpot ticket.

Its always terribly fascinating to hear what big-money Lottery winners intend to spend their windfalls on. Some, like Harold, go for the flashy cars, whilst others are concerned that life will change and that they won’t like it, which also happened to be one of the first questions out of Madelaine’s mouth after having been informed by her husband that they were Lottery millionaires. Madelaine is quite content to stay where she is and enjoy the freedom of choice brought about by a big-money win.

Their Stories Inspire Us!

Its stories like that of Harold and Madelaine that inspire us to go out and in the spur of Jasthe moment buy a Lottery ticket. And really why not? Especially considering the fact that Lotto 6/49 and Lotto MAX have crated a combined total of 24 millionaires this year alone.

In BC especially, Lottery winners have been running around in their hundreds. Some prizes may be smaller than a million, or in some cases even slightly smaller than CA$100k, but that doesn’t mean that its any way any less exciting of an experience to walk away with money in the pocket that wasn’t there before.

Lottery lovers all have one thing in common, despite their having differing views on how to spend their winnings; they simply love the thrill of not knowing if and when life as they know it will be forever altered by a life-changing jackpot event.

Are YOU inspired to try your hand at 21 blackjack? Play YOUR lucky numbers online!