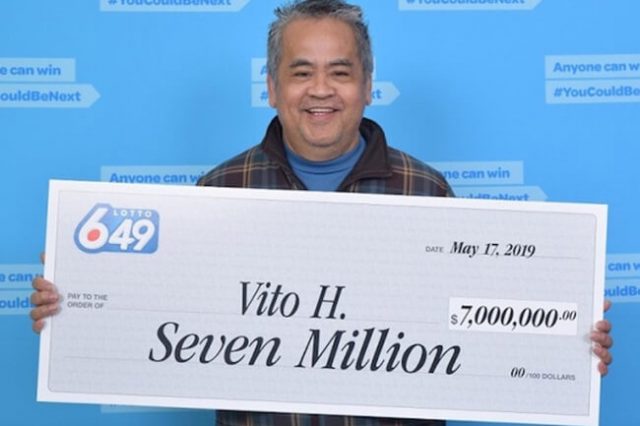 According to Filipino and Surry resident Vito Halasan, who now permanently lives in Canada and works as a janitor, he won’t be quitting his job anytime soon despite having won CAD$7 million in the Lotto 6/49. The Surrey resident’s big win was recently announced in an official statement made by the British Columbia Lottery Corporation (BCLC). Halasan’s birthday had come early this year, as his big break came mere days shy of his 58th birthday. By a stroke of exceptional luck, he had accurately predicted all 6 of the winning numbers in the April 27 Lotto 6/49 draw.

According to the BCLC, Halasan, who is severely shortsighted, tells the story of how he had to hold his winning ticket right up to his face in order to check whether his numbers had won. Says Halasan, despite his blurry vision, when was eventually able to make out the numbers and that he had indeed won the jackpot, he could not believe his eyes.

The first person to hear of his big win was the lucky player’s daughter. She remembers having had to sit down with her dad to double check the numbers on his ticket; double check and then some more; because she too, could not believe her father’s luck. She recalls how he had sat her down at a table and whispered to her that he had just won CAD$7 million playing the Lottery. At first she did not believe him, having assumed that he had misinterpreted his ticket. But of course, it all turned out to be true indeed! So mammoth had been the pair’s disbelief in the incredibly good news that they had after having physically verified the lucky numbers by comparison, repeatedly checked the numbers on the operator’s online platform too.

Halasan, who is a father to three children and four grandchildren, whom he considers to be his true fortune in life, told the BCLC that the money would afford him the opportunity to provide a better life for his family. He said that even though he did not plan on quitting his job as janitor, at least now that he won his millions, he would be able to cut down considerably on the hours spent at work. He also planned to buy a big house where he and his children and grandchildren will be able to live comfortably. Halasan has been a resident of Canada for the past decade now.

Halasan, similar to so many other ordinary citizens just like him, now has the opportunity to dream big. Said Halasan to the operator in an interview, playing the Lottery was all about exactly that: the permission to dream really big.

Lotto 6/49 is one of the BCLC’s most popular games, with draws taking place on a twice-weekly schedule; Wednesdays and also on Saturdays. Best of all is that each draw guarantees a prize pot of at least CAD$1 million.

Could YOU be the next BIG WINNER? Play the Lottery online and see!