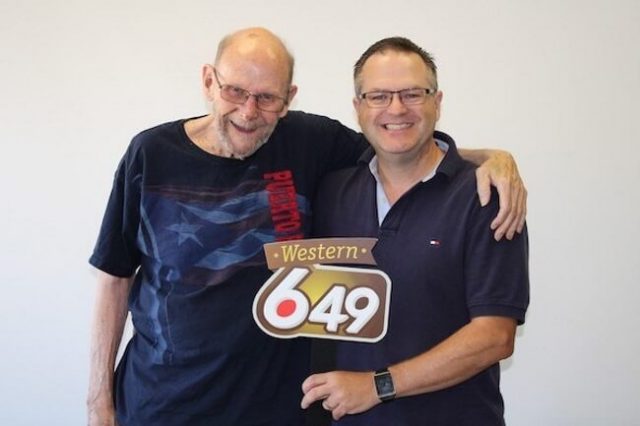 It’s one thing to make a promise of sharing one’s Lottery winnings with someone else on the off chance of such a wondrous thing actually ever coming to pass. But it’s quite another to make good on that promise when it actually becomes a reality. It however wasn’t too much of a challenge for a father from Winnipeg. David Hunter has said that he will be making good on a vow made to his son, also David Hunter, to always share equally any amount won that exceeded $100.

In fact, Hunter Sr. appears to be quite happy to split his $2 million jackpot win with son David Hunter Jr. Hunter Sr. revealed in a news release announcing his Lotto 6/49 win that his winning ticket was actually a free play ticket redeemed at a local kiosk that is situated on the inside of a Real Canadian Superstore on Portage Avenue, Winnipeg.

The Excitement Was On The Inside

Hunter Sr. had on the day of his having discovered that he was a winner handed his ticket to the clerk at the store to be checked. He had at the time been getting ready to purchase his new tickets for the following week. Great was his surprise when the clerk informed him that he had actually won $2 million.

The Winnipeg father quickly added that he in all likelihood did not show too much excitement, having never been one to reveal too much in terms of an outward display of emotion. But, David Jr. is quick to ad, he is quite sure that his dad was “excited on the inside”.

And really, who in their right mind would not have been?

Both Sr. and Jr. have definite plans for the money won by Hunter Sr. The elder of the two plans to invest some of his winnings in savings and other investments, whereas Hunter Jr. will be spending his windfall on an education for his children.

A focus on family, it seems, isn’t restricted to sharing Lottery money only in the Hunter household. Its quite obvious judging by the reactions of both father and son that family and children and a financially healthy future are commonly shared qualities.

Hunter Sr. may well assume his lack of an emotional reaction upon having first discovered that he had won to be out of the ordinary, but the truth is that many players display like behaviour, being utterly dumbfounded by the sudden knowledge that they now have a great deal more money than minutes before.

Try YOUR luck. Play the slots at Betway and see if YOU can WIN!