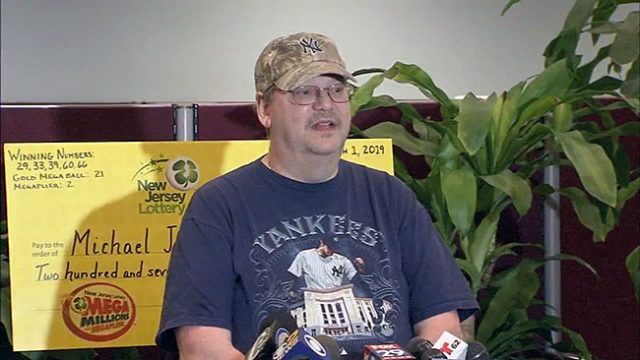 There’s no such thing as new news; or so the old saying goes. But the following story debunks that particular theory with sheer pomp and grand ado. Mike Weirsky is an unemployed man living in New Jersey, USA. He is also a Lottery player, and a man who is seemingly more forgetful than most. Weirsky tells a story that has the ability of causing any attentive reader to break out into a cold and very nervous sweat.

Now no longer down and out in the traditional sense of the word, the New Jersey national recently won the Mega Millions Lottery. The size of the jackpot? A life-changing $273 million. But it was very nearly not to be good old Mike’s time to shine, because when our player left the store in Pohatcong Township where he had purchased his Lottery tickets, he forgetfully left without his tickets in tow.

Were it not for the very pure of heart Good Samaritan, Mike Weirsky would in all likelihood not even have realized that he had won. And he most certainly would never have even seen a dime of his lucky winnings.

Read more … Act Of Kindness Pays Off For Lotto Winner

From Bum To Leisure Bum

The 54 year-old player only recently learnt of the fact that his life had changed for good, and most definitely for the better. Weirsky good-naturedly quipped that all his life he had been nothing more than a bum, and that now, thanks to the Mega Millions state Lottery, he’d been promoted to the status of beach bum.

Mike does however at least offer some form of explanation for his having left the tickets that he had at the time, just purchased, behind in the store. According to the lucky player, he had been fiddling around on his smartphone at the time of having purchased his Quick Pick tickets.

Here’s hoping that good Mike, now known as better-life Mike, will remember the good deed performed by his Good Samaritan. And considering his obviously jovial nature, chances are that he will indeed.

Over the years many stories like Mike’s have emerged out of the woodwork, but none quite as nerve chilling; not reported to the public news ear, at least. There were those who had sat on their tickets until the very last, brushing shoulders with the cash-in deadline in nerve-wrecking ways, and there have been others who had donated their winnings as-is to charity.

There is no end to the weird and wonderful stories associated with massive cash windfall wins, and the Lottery, if anything, has changed the lives of many people all over the world.

But Mike’s story most definitely is unique. Meet Mike Weirsky, the man who has managed to push forgetfulness to dizzying new heights.

Is it your LUCKY DAY? Ply Bingo and find out!