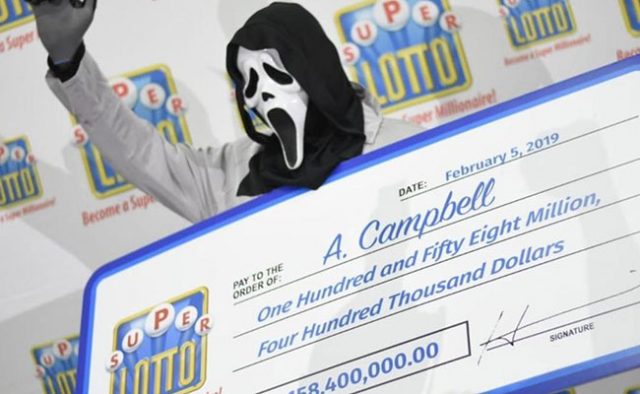 A lotto winner over in Jamaica has taken the innovative route to keep his identity a secret. Although using a mask at a check handover ceremony is not unheard of, this player’s particular choice of mask has had fellow punters across the world grinning in amusement as they wonder who the man behind the mask really is.

Dressed in a ‘Ghostface’ mask, the winner – who has been identified only as A. Campbell – collected winnings of more than $158,400,000 in Jamaican dollars (around US $1,171,400) in the form of an impressively large check. For those who are unaware, Ghostface is a character in the iconic ‘Scream’ movie series, and his signature ghostly facial mask is often seen around Halloween each year as fans recreate his look.

How Campbell Discovered the Win

According to local paper reports, Campbell became sick with shock when he discovered that he had won the Super Lotto back in November after purchasing a $200 ticket. He has revealed that he found out about his win on the same night during which he had bought his ticket.

Normally, the player said, he writes down the numbers from the draw on television, has something to eat, and then goes back to check his numbers. On the fortuitous night in question, he glanced at his ticket and immediately ran into his bathroom yelling, “I won! I won!”

The punter reportedly picked up his impressive check on February 5 this year. While he originally admitted to becoming sick after realizing how big he had won, on the day of the ceremony he said that he was now alright – just a “bit numb” from the suddenness of it all.

As for how he plans to spend his fortune, Campbell seems to have put plenty of thought into how to do so responsibly. He told media personnel (while wearing his Ghostface mask, of course) that he plans to buy a nice house, which he hadn’t found yet at the time but was planning on hunting for soon.

Campbell revealed that he likes to handle money, and was firm on the fact that he doesn’t beg or borrow from others. He said that he is looking at ways of using his money that can turn it over and generate even more. He plans on growing his small business into something bigger, while also buying an apartment and a few other necessities. In his own words, “[he] loves to have money”!

Scream for joy when you win BINGO! Play today.