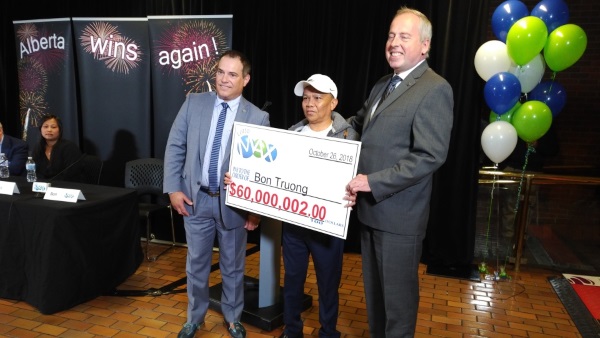 If ever there was an argument in favour of solid consistency, then this one take’s the cake as well as the candles. The Canadian landscaper who recently showed up at the offices of the WCLC a few days short of two months before the October expiry date indicated on his $60 million Lotto MAX winning Lottery ticket, says that he has been playing the same numbers for 30 years.

Bon Truong, originally from Vietnam, lives in Edmonton in Alberta and says that he has no plans to retire anytime soon, what with him being young and still strong. The fact that Truong has just won the largest Lottery win awarded by a Canadian operator makes no difference to the committed family man. He loves what he does for a living after all, so by this logic, why quit because of money? Truong certainly does appear to have the correct mentality about many things in life, as clearly evidenced by his prior decision to first come to terms with the big win and make up his mind about whether to even claim or not before eventually having approached the offices of the operator. Bon Truong wanted to be sure that he and his family would be able to maintain their quality of life in all things not related to money before he even considered fessing up to the win. He had told only his wife about the lucky ticket and had kept it locked up in his home safe for the time being.

Truong compiled his set of exceptionally lucky numbers (as these have now without a doubt turned out to be) by combining dates that hold some kind of significance meaning to the family man, including birthdays and other dates with special meaning. The numbers played by the Vietnamese-turned-Canadian are 2, 3, 4, 8, 9, 20 and 30.

The lucky winner had purchased his ticket from the Pure Casino Yellowhead in Edmonton. He did so during last year October. Even though he had waited 10 months before claiming, he knew since the day following the lucky draw that he had won. He had after all checked and re-checked the winning numbers, just to be sure, because he recalls not being able to believe his own eyes at first.

He Wants To Go Everywhere

But now that the decision-making peace has been restored, Truong has come up with a priority list for how he plans on spending some of his winnings. Paying off his debts and purchasing a new family home topped his list. He also wants to take his family on a well-deserved vacation break. He hasn’t really decided where but said that he thinks “everywhere” may be in order.