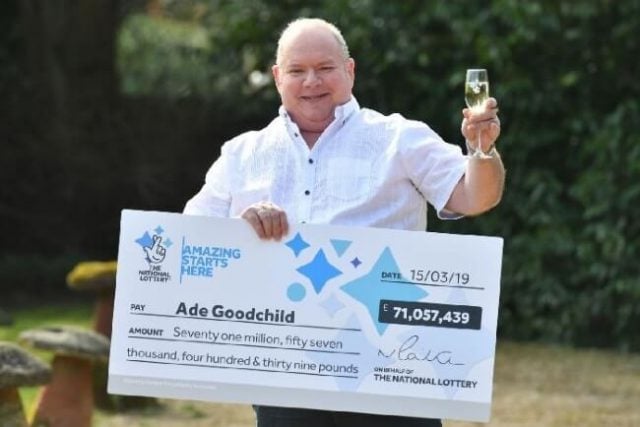 It’s always positive news when someone wins the Lottery, but when it’s a downright ordinary everyday worker employed in a UK factory, it’s just so much more special. Lives are changed by Lottery wins, and this particular winner is bargaining on the fact! Many people claim that nothing will necessarily change after hitting the jackpot, but EuroMillions £71 million jackpot winner Ade Goodchild is very much looking forward to the fact that the money will change his life for the better, and he minces no words in expressing his absolute joy and excitement about looking forward to doing things that he would never have been able to afford otherwise.

The 58-year old winner may have some hair left on his head yet, but we’re willing to bet our own money on the fact that there isn’t a single pretentious hair anywhere to be found. In addition to his outspoken manner and his being quite eager to reveal what he plans to do with his fortune, he also had no problem with revealing his identity, something that many players are hesitant to do, especially in the event of having won a large sum of money.

Working shifts, said the former factory worker, is something of the past. From now on, life is all about travelling, seeing the world, and enjoying those things that he had only ever dreamed of doing and having.

But, said the big winner, last Saturday was spent very much in the same fashion as what it would have been spent even in the event of his not having ever won a single penny. He spent the day watching Wales nab the Rugby Six Nations Grand Slam with his father. The only difference was that this time round, the beers were of a better quality and slightly more expensive, and they were able to buy pizza too.

Much, said Goodchild, how he thought millionaires spent most Saturdays.

The UK player claims that he always had a hunch that one day, he would strike it rich. He did not know exactly when or how, but he knew instinctively that someday, it would happen for him. He says that at first, he did not think that he had a winning ticket. He had to double check the numbers before realising that he had actually won the jackpot. Even bigger was the surprise when he realised the size of the jackpot and saw that only one winner had struck it lucky.

Who were the very first people that he told about his big win? His mom and dad of course. And what will he buy before anything else? A lovely house!