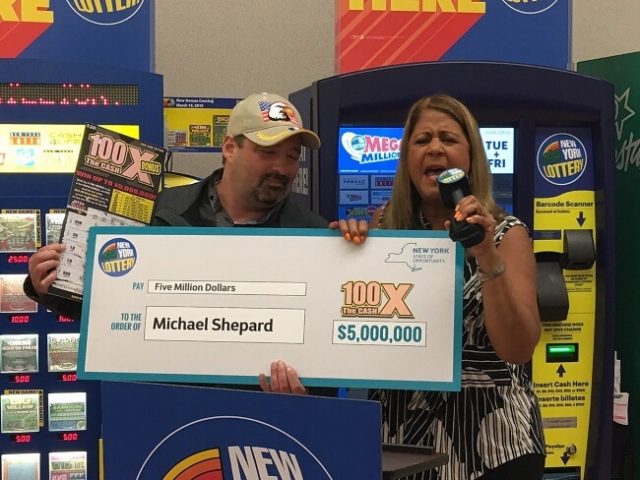 One very lucky New York Lottery scratch-off player has won a $5 million jackpot cash prize after he purchased a winning “100X the Cash” ticket from the Price Chopper store in Genesee Street, Utica. The 49 year-old Michael Shepard describes the win as a dream come true, and a life-changing one at that. The $20 scratch-off ticket turned out to be worth a whole lot more than its miniscule price tag.

Shepard received his ceremonial check from the New York Lottery’s Yolanda Vega on site at the store from whence the winning ticket was purchased. But, says the lucky player, at the time of his having purchased the ticket, it was very much business as usual with not a hint of pomp or celebration associated with the routine action. He tells the story of stopping at the grocery store every Friday in order to cash his paycheck, and has fallen into the habit of purchasing a scratch-off ticket at the same time.

Little did he realise just how different that particular Friday would turn out to be.

Reality Was Slow To Set In

According to Shepard, even after having realised that he had won, it did not quite sink in and at first, his friends were more excited than what he was. Even so, upon learning that he had won, he immediately contacted his financial adviser for the necessary advice; even before he even approached the local Lottery office to claim his prize, winning ticket in hand.

Spending his big win in a responsible manner is obviously a top priority for Shepard. But despite his level headed nature, he does have some immediate plans of his own with a small portion of his winnings. He really wants to go on vacation to somewhere where the weather is warm.

Shepard opted in on receiving his winnings once off as a cash lump-sum. According to the law on taxes and contributions, he will receive a net check to the value of $3,395,000.00. Michael Shepard will almost certainly be able to afford that vacation and still have enough money left with which to make quite a few financially sound decisions.

According to a recent game-report published by the New York Lottery, there now remains 4 unclaimed first-prize tickets. This is in addition to the 34 unclaimed second-prize tickets each worth $25,000.

Players are advised to regularly check their tickets for possible wins.

Is there a jackpot with YOUR name on it? Play and find out!