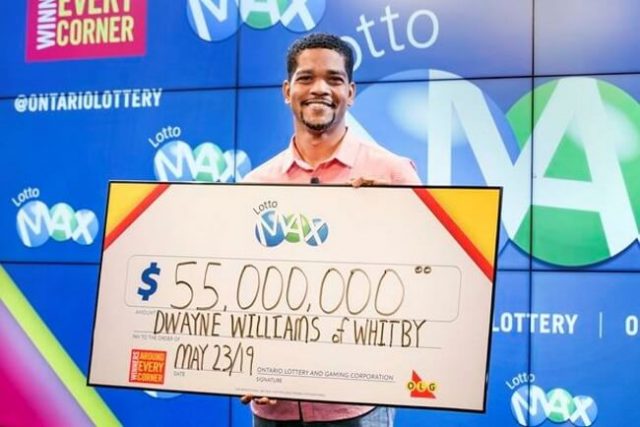 So surprised was Lotto Max winner Dwayne Williams by the news that he had won CA$55 million, that he had entered into a state of being completely dumbfounded. So dumbfounded in fact, that it took him all of two months to claim his winnings from the Ontario Lottery & Gaming Corporation. In Dwayne Williams’ family, purchasing a Lotto Max ticket on a Friday and checking for any winning numbers on a Saturday is nothing short of a regular tradition. But sometimes, as these things tend to go, life happens, and on the morning of Saturday April 6 Williams did not get around to comparing the winning numbers with those displayed on his ticket.

Later during that same day, Williams recalls, he had heard somewhere that that week’s winning ticket had been sold to a player residing in the Ossawa area. He remembers having jokingly remarked towards his wife that they had finally won the Lottery. Little did the lucky player realise at the time of having quipped about winning that he was in fact the winner of the latest Lotto Max jackpot!

It was only later on the Saturday in question that Williams remembered about a mental note to check his ticket; a mental note that he had made early that morning after he had joked about with his wife about winning. The lucky winner proceeded to check the winning numbers by making use of the OLG’s Lottery app. The app allows for tickets to be scanned for quick verification, so as to eliminate any errors when checking numbers.

Imagine his surprise when the app revealed that he was in fact the holder of the winning ticket for that week’s jackpot. So taken aback had Williams been after having learnt that he was a winner, that he immediately assumed that there had to have been some mistake with the OLG’s app. He assumed that a cyber criminal must have hacked the system; causing false readings with regards to scanned tickets.

The really astonishing bit, however, is the fact that Williams and his family had decided to wait all of two months before claiming his prize from the OLG. The family said later on that it was important to Williams and to them, that due consideration was given to the most responsible way in which to utilise the winnings, even before the money was claimed from the operator.

See if YOU are lucky! Play theSlots ONLINE!