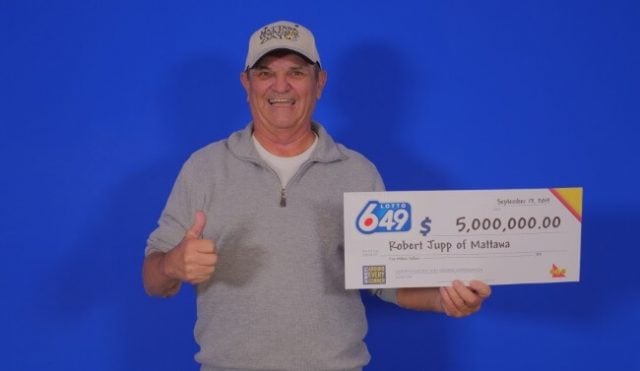 A family from Ontario has had their lives changed for the better thanks to the recent September 11 Lotto 6/49 draw. Mattawa resident Robert Jupp has bagged the jackpot win of CA $5 million. Jupp wasted no time before heading on down to the operator’s offices in order to stake his claim to the prize money. The Mattawa man is a father to three children and seven grandchildren. Raising a family is obviously no cheap venture and life is about to become a whole lot easier for everyone living it up in the Jupp family.

Robert Jupp made use of the OLG’s handy instant win verification app. The operator prompts players to make use of the system when checking their numbers against the numbers registered for any given draw. The process is effortless and accurate and reveals verified results in a matter of seconds. It really doesn’t get much easier or automated than that.

Three more players were recently treated to the Lotto 6/49 royal money treatment when they correctly projected the winning numbers due to fall during August draws. A split of the jackpot was in order for two of the players as both had correctly predicted the winning numbers. The third of the three lucky players, one Brampton resident Robert Clemens who had bought his lucky ticket at the Petro Canada in Caledon Village, was lucky enough to have been the only soul to correctly predict all of the winning numbers for the August 21 Lotto 6/49 draw. This means that Clemens has the CA$9 million awarded by the draw all to himself to spend in any way he chooses.

But that’s not to say that Jessy Logan and Theresa Winters Day, both hailing from Nanaimo, aren’t every bit as excited about their shared win as what was the case for Robert Clemens. Winters Day plans on spending her share of the jackpot prize money, among other things, on a trip to Disney Land. As for Logan, he will finally be in a position of realising his dream of owning his own music recording studio.

Many In Utter Unbelief

Lotto MAX has been going about its own win-win business too. Various players all over Ontario recently had the pleasure of bagging stellar cash windfalls. Everyone has their own special plans for how they want to spend their cash and most people relate the story of how they were hardly unable to believe their own eyes upon having discovered that they had won.

Don’t miss out on a WIN. Bet on sports ONLINE today!