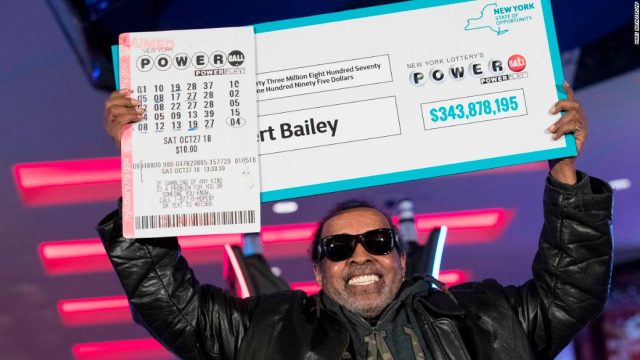 Last month, the largest lottery jackpot in New York State’s history was struck. A retired government employee from Harlem stepped forward a few weeks ago to claim his windfall – an unbelievable Powerball jackpot prize of $343.8 million.

Unsurprisingly, Robert Bailey has no intentions to stop playing his favourite gambling game any time soon. The 67 year old winner recently spoke to Resorts World Casino in Queens about his fortune, noting that he had even played the morning before he arrived at the gaming establishment. Moreover, he held up the tickets to prove it.

Bailey has been faithfully playing the exact same set of numbers since as far back as 1993. That’s 26 years of constant perseverance, and the player has reportedly tried his luck in all of the official New York State Lottery games as well, just for good measure.

Luckily, his perseverance paid off big when he managed to break state records and scoop the largest prize to ever have been awarded to a New Yorker. He’s continuing to persevere, too, even after taking home an incredible $125,396,690 after tax.

READ MORE: Most Memorable Moves by Past Lotto Winners

Just like he has always done, Bailey insisted on playing on October 27, despite it being a cold and rainy day. He was also driving around with friends at the time, but that didn’t stop him from making a quick detour to drop a few dollars on a ticket he would later discover to be his very own ticket to the good life. The player told his friends to pull over in front of a deli across from his apartment on 126th street, and filled in his fortuitous digits: 8, 12, 13, 19, 27 and 40. The rest, as they say, is history.

Just a few hours later, after stopping to catch a college football game, the former government employee who had been retired for around 10 years went onto the Lottery’s online website to check his numbers at around 11:30pm. When he saw that they all matched those from the draw, he said, his jaw dropped open immediately.

Plans for Vacations and Property

According to Bailey, he tried to stay calm, sitting down to watch some TV shows that he had recorded on his DVR. However, he did admit that he didn’t get a wink of sleep that night. The punter, who has kids but is not married, didn’t even give anyone a call after discovering that he had won. It was only later when he dialled up his lawyer and a financial planner.

Bailey’s win came as a split portion of an overall jackpot worth a jaw-dropping $687.8 million. The other winner is based in Iowa. As for his own jackpot, Bailey has called it a ‘good life changer’, and plans to ‘do the right thing’ with his windfall. This means taking a trip to either Las Vegas or the Bahamas, but also purchasing a nice spot of land and a new home for his mother.

Could YOU be the next jackpot winner? Play now and find out!