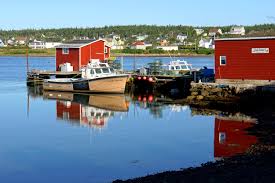 Over the course of the last year the streets and buildings of Inverness, a small town in Nova Scotia, were bursting with excitement and activity. Thousands of visitors from near and far gathered every Saturday to enjoy the music and other types of festivities while they dreamed of hitting the town’s unique lottery and going home with a big win.

Inverness is located on the west coast of Cape Breton. The residents — the town has less than 2000 residents — created a lottery fundraiser that is based on the “Chase the Ace” game of chance. This game involves a kind of on-the-spot progressive jackpot. The jackpot of the game grows and grows until the ace of spades is picked from a deck of cards. Every week one ticket number is allowed to make the pick. If s/he picks the Ace of Spades, s/he wins the entire jackpot.

The Inverness lottery started as a small local lottery but by the fall its growth was phenomenal. Last Saturday Donelda MacAskill, a puffin-boat tour operator, won the lottery, ending the festivities. But the real winner is the town of Inverness which drew hundreds of thousands of Canadians week after week. These people came to Inverness to play the lottery but they ended up helping the local economy by spending money and creating a festive atmosphere that Inverness will not soon forget.

The lottery was dreamed up and facilitated by the local branch of the Royal Canadian Legion. As members discussed how they could fundraise for the town, one person mentioned the lottery game “Chase the Ace.” Legion members discovered that another legion, this one in Hants County, N.S., had tried the lottery and been able to amass a jackpot of $300,000. When the Inverness Legion heard about the Hants County success, they decided to replicate Hants Count’s success and create their own contest.

Some Inverness citizens worried that the contest would create too much work and that the contest could go on for longer than they felt comfortable. They felt that, since the contest must continue for as long as the ace of spades isn't picked, it could, potentially, go on for up to 52 weeks as successive selected cards are removed from the 52-card deck. Yet when all was said and done, the town decided to give it a go.

How the Game Works

The game works like a 50-50 draw. Competitors buy a numbered ticket. At Inverness, $20 bought you 12 tickets. The holder of the ticket that won the weekly draw received 20 per cent of that week's ticket sales and a chance to pick the ace. In order to win, the individual had to be physically present in Inverness for the pick. The weekly draw winner would select a card from the deck and if s/he chose the ace s/he would win the entire jackpot and end the contest. If the ace wasn’t chosen that week, 30 percent of ticket sales were collected to form the next week’s jackpot with the remaining 50 percent going to charity.

At first, things went well. By the end of last winter the jackpot was at about $59,000. Local residents were the main players and periodically people from neighbouring towns and counties played as well. Mr. MacQuarrie, local Legion president and lottery organizer, said that the organizers hoped for a $200,000 or $300,000 jackpot which would generate a decent profit. Two non-profits had plans to split the profits — the legion and a local skills-training centre for adults with disabilities. Both organizations planned to use the money to upgrade their facilities. So the progress of the contest was, from their point of view, perfect — enough but not overwhelming.

During the summer, however, word started to go out about the lottery and more and more people started to come to Inverness to participate (According to the rules of the game, the winner had to be physically located in Inverness when the winning card was drawn in order to collect the win.) The deluge of people started with vacationers and people with summer homes and spread to new visitors who came to Inverness specifically to take part in the lottery. By the time Inverness held its annual Inverness Gathering — a week-long Celtic festival of dances and general merriment — the lottery had taken on a life of its own. The contest soon combined with the entertainment and festivities. Even after the “official” festival dates had ended, as the contest continued, so the festival just proceeded as well.

Everything turned into one big party. “Something changed,” Mr. MacQuarrie said. “It [the lottery] became part of the festival.” Throughout July and August thousands of visitors arrived every weekend — some from different points along the Cape and others from various regions in Nova Scotia. The residents of Inverness accommodated the guests and everyone felt the good cheer.

By the end of September the jackpot had surpassed $1 million dollars. The weekend visitors were stretching Inverness’s resources but instead of becoming angry, local residents simply chipped in to help the two small organizing committees. Some volunteers organized parking while others prepared the tickets. Musicians stepped forward to entertain the lottery players who spent a lot of their time wandering the town while they were waiting for the pick. The influx of visitors was a big boom to the local retailers who did brisk business. Three young girls earned $250 for their cookies and lemonade.

In the end, the “unplanned” explosion of ticket sales brought the jackpot to $1.78 million dollars and brought the entire community together. MacQuarrie described the scene. “The community just seemed to embrace the idea that this Chase the Ace is more than just a fundraiser. It’s a community putting forward our best foot.” Another organizer, Mr. MacAuley, commented that the town’s commitment to hospitality was a major factor in drawing visitors. “This community put an atmosphere on that was something else.”

Even the winner, Ms. MacAskill, admitted that she kept returning to play the lottery because the town was so friendly and welcoming. “It was like a big kitchen party” she said. The event disrupted the townspeople’s day-to-day lives — “they literally didn’t have a home town for that day” — but still, everyone participated and did everything that they could to assure the lottery’s success.

Following the success of the Inverness lottery two other Cape Breton municipalities, Whycocomagh and Port Hood, have launched their own town lotteries.