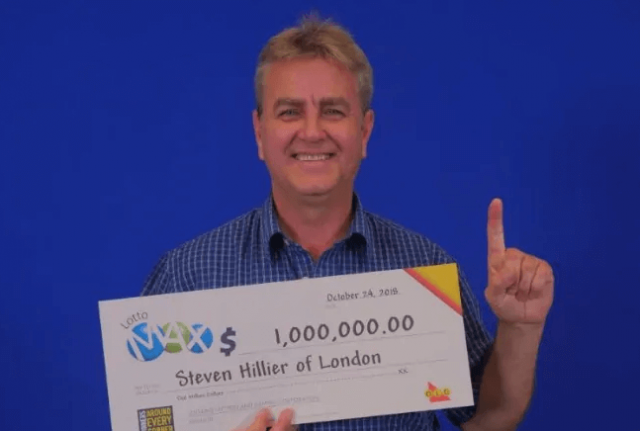 If there’s anyone who had a great week in the second-last week of October, it was Steve Hillier. Last Sunday night, the London, Ontario-based businessman was pleasantly surprised with two fantastic twists of luck that left both himself and his family in something of a daze.

It was on that Sunday evening when Hillier discovered that his penchant for playing lotto had finally paid off. He had won a whopping $1 million jackpot in the October 19 LottoMax draw – and clearly, his lucky streak was set to continue when he received even more good news the following week.

On Tuesday the 21st, Hillier then went on to become a first-time city Councillor after winning a sought-after seat in Ward 14 during the most recent municipal election. When CBC London interviewed Hillier to confirm the news via telephone, the businessman and father of two was sitting at his computer and making has last mortgage payment on his house.

Hillier, who has been playing the same lotto numbers for 30 years now, got his ticket for the October 19 LottoMax draw through a free play. He obtained his ticket a few days before the draw while he was buying gas at the Petro-Canada filling station on Wellington Street at Exeter Road.

According to Hillier, he checked his ticket and discovered that he had won a few free plays, and decided to get one. As he was extremely busy with running his municipal campaign, he did not think too much about his ticket over the next few days, he said in his CBC interview.

On Sunday evening, just one day before the residents of London voted on the first ranked-ballot election in current Canadian history, Hillier checked his first three free plays and found nothing. However, the last one, in his words, went, ‘Ding, ding, ding, ding. You’ve won a million dollars!’ At first, the player was convinced that it was a mistake, turning off his phone and then re-downloading the app. However, the same winner’s message came up a second time.

Hillier and his family quickly drove to a Byron variety store nearby to have the win officially validated by a retailer. They checked the numbers and confirmed the win, and from there, Hillier sat in London for another two days waiting for the election results to be revealed. Once it was confirmed that he had indeed won a seat as well, all he could say was, ‘It was surreal.’

Hillier plans to take his council seat, and will drop his day job as a restaurant equipment firm operations manager to become a full time Councillor. He also plans to fund post-secondary tuition for both of his children with his extremely fortunate win.