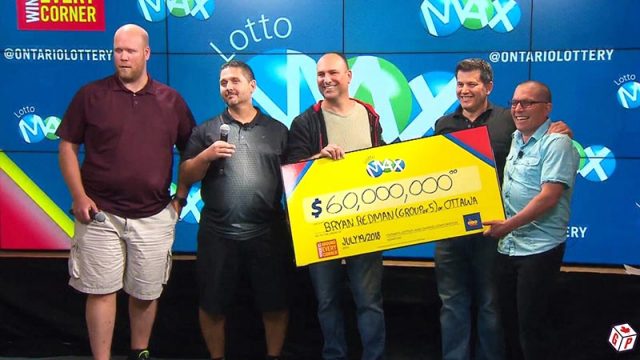 Friday the 13th has always traditionally been regarded as a day of bad luck. However, that definitely wasn’t the case for five Ottawa-based friends in the federal government’s IT department, who managed to win a whopping $60 million in lottery jackpots on the ‘unlucky’ date last month.

Bryan Redman and his four work colleagues, Christopher Beazley, Gilles Dionne, Norman MacDonald, Stephane Dionne, had a habit of splitting lottery tickets that has spanned over a decade. The five friends have been purchasing joint tickets ever since they began working in the same department, and have also traveled together with their wives and nine children combined.

Friday the 13th Takes a Turn

Each week, every member of the group took turns buying lottery tickets in the hopes that one day, they would get lucky and nab a life-changing win for themselves and their partners in crime. It was on June 13 that Redman stopped at a Mr Gas station outside of Orleans on the eastern border of Ottawa to pick up a quick pick Lotto Max ticket only a few hours before the daily draw.

Little did he know that this stop for gas would turn into one of the luckiest moments of his life so far – and on a classically unlucky day, no less! The next morning, Redman checked his ticket on the OLG app and saw that he had scored a whopping cash windfall of $60 million. Racked with disbelief, the winner drove to his nearest lotto outlet to check it again, immediately calling his friends once the win had been confirmed.

The five friends met up on the evening of June 14 to validate the ticket together at Mr Gas. They kept the news on the down low until the following week, when they attended a press conference at the OLG prize centre in Toronto. Shortly before revealing their big news to the public, the development shot through Payments Canada, where four of the five winners are currently employed, essentially turning the group into overnight celebrities among their co-workers. 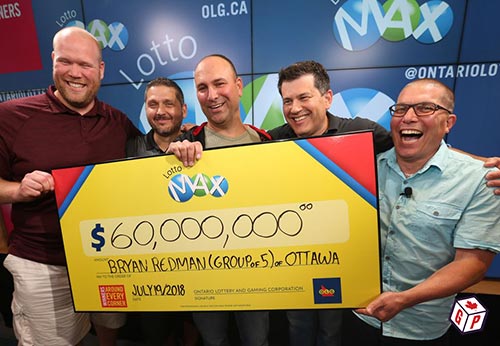 Group to be Smart with Spending

Payments Canada CEO Gerry Gaetz has expressed how happy he was for his employees’ good fortune, noting that he remains unfazed by the possibility of losing all four of the lottery winners at once, should they opt for early retirements. With that said, none of the winners seem to be inclined to quit their jobs just yet, and all have remained in their roles.

In an all-staff event celebrating the win, it also became clear that the group’s members wish to be smart about their new fortunes rather than spending it all at once. When asked whether or not they planned to buy a boat or a sports car, the five winners laughed and confirmed that the security of their families would always come first. Gilles, on the other hand, hinted at the possibility of a new house in the distant future.