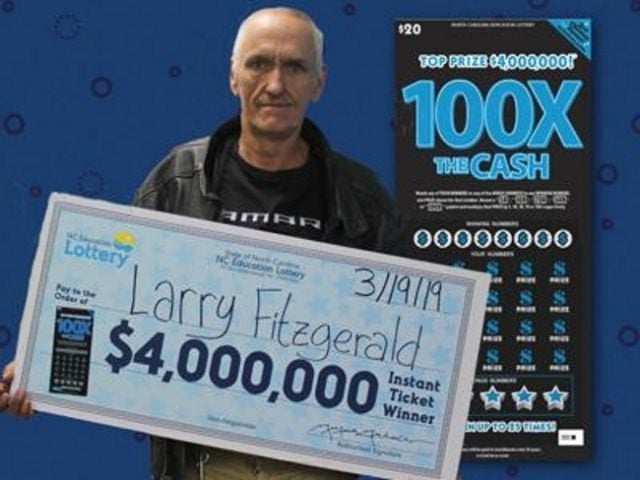 South Carolina thrift store worker Larry Fitzgerald is a firm believer in perseverance paying off, even when it comes to something like playing the Lottery. Whether Larry actually ever believed that he would win, especially a $4 million jackpot, is another story altogether. It seems that Larry figured that if he continued to play a ticket a day, somewhere along the line, he would end up winning something. And thanks to Larry’s daily stop at Samirs in Nebo, McDowell country, he did not only win, but won really big.

The 100X The Cash scratch-off ticket that Larry had purchased required of him to beat the odds of 1 in 1,8 million in order to win the top prize. It seems as if it was Lucky Larry’s lucky day indeed.

Read More…Office Lottery Pools – The Good And The Bad

Winners are generally offered the option of being able to choose between annuity annual payments or a cash lump sum. In Larry’s case, it was a choice between 20-x $200,000 payments spread out over 20 years, or a lump sum once-off payment of $2,4 million. Larry opted for the latter. A win, he says, that to him is absolutely life changing.

With his newfound fortune, Larry plans to purchase a house that is located on a large portion of land on which to restore his classic cars, something that appears to have been a life-long dream of his. Thanks to his resolve to one day win, Larry’s dream can now become a reality.

Why We Play Despite The Odds

The surprising bit is that many people, much like Larry, believe that they will someday win the Lottery, and that the secret is to play consistently. Psychologists have for many years tried to understand why it is that we believe in our own good fortunes despite the incredible odds that must be beat.

The answer, many now believe, lies in the fact that human beings have never at any stage in our evolution as a species, been required to make the kind of probability calculations required to compute Lottery-sized odds. In other words, we don’t realise what we’re up against. And yet, despite the math, playing does pay; just ask the Larry Fitzgerald’s of the world.

At the end of the day, whether we win or whether we lose, playing the Lottery does benefit someone, somewhere, and not just the big winners. Lottery money is used to achieve a great deal of good to alleviate poverty and offer aid and support to charitable organisations all over the world.

You NEVER know when YOU could be a winner. Play the Lottery NOW!