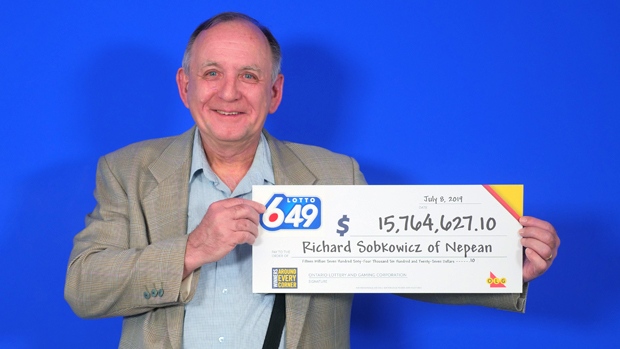 What better way to ensure that one is able to retire on time and to do so in comfort too than by winning the 6/49 Jackpot Lottery draw? Just ask already retired Ottawa citizen and self-professed regular Lotto player Richard Sobkowicz. The player recently bagged the stellar nearly $16 million Lotto 6/49 jackpot prize during the July 3 draw.

The 68-year-old Napean retiree will in all likelihood not have seen that one coming and as attested to by his solidly responsible plan to invest the bulk of his winnings in favor of his retirement, as well as the player having taken his time to come forward to lay claim to his riches, Richard Sobkowicz is obviously a man not easily given to impulse, but instead, prefers to think things through in a slow and steady manner.

Many Winners Opt To Wait

One may think that anyone, after having realized that they are indeed a ‘Big Winner’, will waste no time in hurrying on over to their local operator’s offices to officiate their new fortune and claim the money now rightfully theirs. But interestingly enough; and this happens to be information verified by the Ontario Lottery and Gaming Corporation; a surprising number of players tend to “wait it out”, so to speak, before approaching operators to claim their winnings.

This is certainly true in the experience of the OLG. The operator can often be heard reminding players to check the numbers of their tickets by either comparing their tickets manually with recent draw results, or by scanning them using the special winning number verification app. Many people tend to forget to regularly check their tickets and for a variety of reasons.

Thinking It Over Is Best

But Richard Sobkowicz isn’t the forgetful type. He simply needed to mull things over and decide for himself what it was that he planned to do with his instant fortune before laying claim to his winnings.

As previously mentioned, Sobkowicz is already retired and as such, is obviously eager to make his money last for as long as possible so as to continue the standard of living to which he has become accustomed throughout his working life. The retiree has said that he plans to invest most of the money. Moreover, being a married man, he will spend some of his newfound riches taking good care of his family.

Could YOU strike it rich? Play online slots at Spinland and see if you’re a WINNER!