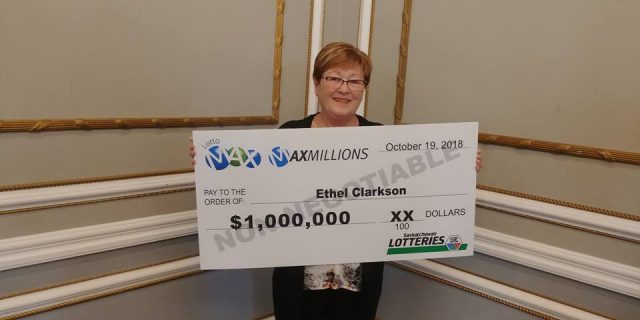 A grandmother living in the Canadian region of Saskatchewan was thrilled with a lovely birthday surprise earlier this month. The lucky gran is now more than $700,000 wealthier thanks to a winning lottery ticket that was gifted to her by her granddaughter for her birthday.

Regina-based Ethel Clarkson has spoken about her win to local media outlets, saying that she doesn’t like asking her family members to buy her anything for her special yearly day. This year, she confessed, she decided to keep it simple when her granddaughter asked her what she might like as a gift.

Her granddaughter kept asking, Clarkson said, even though she didn’t really want to ask for anything. In the spur of the moment, she suggested that maybe a lottery ticket would be an affordable idea – but, in her own words, she certainly wasn’t expecting to land such a hefty fortune!

Speaking more about her prize, the grandmother revealed that she still considers her big win to be quite surreal. She recounted her actions upon learning about her win, noting that she starting jumping up and down, screaming and crying, as she was so excited at the news. However, she does admit that she didn’t really think that her good fortune was really real at the time.

Plans for a New Car and More

As for what she plans to do with the money, Clarkson has already put plenty of thought into how to spend her new fortune. She intimated that her current plans include replacing her old jalopy with a nice new car, as well as paying off her debts so that she can live stress-free.

It’s a dream to be free of debt and able to help her family financially, she said in her winner’s interview.

It has clearly been a season of huge wins for lucky Canadian lotto players, who have been striking it rich throughout the buzz of excitement surrounding the US’s recent record-breaking $1.6 billion Mega Millions jackpot. Just a few days ago, it was also revealed that a winning $60 million Lotto Max ticket was sold near Edmonton, meaning that one extremely lucky local punter will soon be considerably richer than they had likely ever dreamed!