Can you Find a Code for Lottery Products? 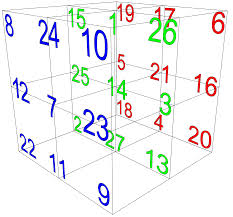 If you play the lottery, you might have wondered — are the results really as random as the experts tell us? There’s no definitive answer, but a recent case draws questions.

In 2011 Mohan Srivastava claimed that he was able to discern a pattern in scratch lottery tickets. He told his friend, Doug Hartzell that, rather than seeing a random jumble of numbers when he looked at a scratch lottery ticket (such as in Ontario's "Tic Tac Toe" game) he was able to see how certain numbers appeared only once in the grids. When these single numbers lined up three in a row, the chances were that the ticket was a winner.

Srivastava calculated this held true 95 per cent of the time. He notified the Ontario Lottery and Gaming Corp. and within days the OLG pulled the game. This was the first time in OLG history that a customer-identified flaw prompted a recall.

The OLG kept the incident under wraps but in a recent interview in WiredSrivastava discusses the incident and discusses his perceptions of flaws in the lottery industry. At the magazine's request Srivastava conducted another test of his code-busting logic, choosing 20 tickets that are currently on sale in Ontario. He predicted that six would be winners. Four of them had payouts. The odds of this happening, Srivastava said, are about one in 50 which is "pretty unusual." This means that, four years after he identified the original flaw in the system, "there is still a problem.”

Srivastava is the son of an electrical engineer from India and a Scottish homemaker. Srivastava admits he was always a nerd. Growing up in Elmira Ontario Srivastava often found himself stuffed into his locker, targeted by bigger kids as a “geek.”

Srivastava received degrees from MIT and Stanford University and then began a career as a geostatistical consultant, working with international mining companies to help them determine where to point their drills. In that job he used statistical data to extrapolate the amount of wealth that might be buried underground. Those analytical skills are the same ones that he applied to cracking the Tic Tac Toe game.

Other life experiences also guided Srivastava in his investigations of his lottery suspicions. In high school, one of the assignments for his computer class had involved writing a computer program for the tic tac toe game. Srivastava also had a natural interest in cryptology which was reinforced by his friendship with mathematician and British codebreaker William Tutte — a man who had once worked on cracking high-level Nazi codes during World War II.

"I had a way of thinking about (the lottery ticket) like a message" Srivastava explained. "And whether it's a winner or not â€” that was the message."

“He's a numbers theory guy, he likes puzzles . . . (and) when he stumbles across these things, he can't put it down" his friend Hartzell says.

In June 2003 Srivastava was given his first lottery ticket as a gag gift. He won $3 and the gears in his brain began to click.

"I started wondering how they're produced” Srivastava said. “By the time I got to the Petro-Canada (to redeem the prize), I knew how I would write the computer program." He didn’t think anything more of it until, suddenly, a voice in his head made him start thinking about options for programming the game until suddenly, he knew the trick.

Srivastava tested his theory by purchasing additional tickets. Over the next few days, with 25 tickets, he reviewed his hypothesis and proved to himself that this was more than a fluke.

“We Need to Talk”

Srivastava first considered the ways in which he could profit from his discovery but figured that it would be more hassle than it was worth. He contacted the OLG but they were unresponsive until he demonstrated his discovery in a "live test."

Srivastava bought 20 tickets and grouped the unscratched tickets into two bundles â€” a pile for winners and a pile for losers. He sent it to OLG with a cover letter that listed the serial numbers of each ticket his prediction for each ticket. "I remember dropping them off and actually feeling that sense of this whole thing bleeding away. I was like, let it go. This is about as crazy as it gets." Two hours later he got a phone call from the OLG's security team. â€˜We need to talk' the man said.

Within days OLG pulled the game from their retailers. Srivastava was asked to test other lottery tickets from various North American lotteries. He inputted data into spreadsheets to try and determine other systemic problems. He found a second problematic scratch ticket — a Super Bingo scratch card game. That game was recalled but he was surprised to learn that none of the lottery corporations or ticket printers were interested in fixing the problems that he had identified. One American ticket printer even threatened him with litigation while the rest brushed off the issue as a “fluke.”

Srivastava says that it’s quite likely that flawed tickets are still on store shelves today. He sees potential for serious consequences. Evidence suggests that these types of flawed lottery tickets can be exploited for money laundering purposes. He is confused by the lack of interest in remedying the problem that he helped to identify.

"If there are some people that are skimming winners, or more able to skim winners, what that means for everyone else is they're getting more losers," Srivastava says. "There's kind of a cruel unfairness for the people left over who weren't in on the trick."

– All Slots offers the Best in Online Gaming –