BC Winners Disbelieving Of Lotto Luck 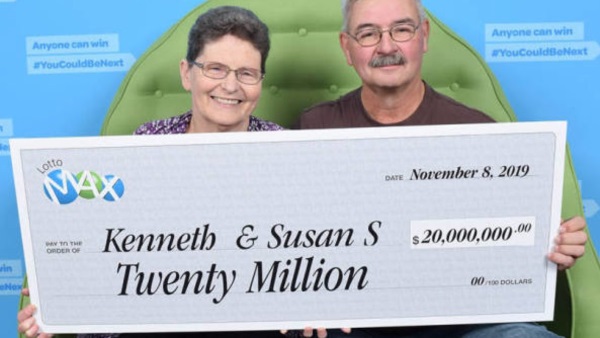 Two separate draws made for much disbelief recently in British Columbia and this is exactly how it tends to go when folks discover that they’ve actually won a life-changing sum of money by playing the Lotto. Kenneth and Susan Salter were first up and the lucky couple certainly could not at first believe that they’d won a super CA$20 million playing Lotto MAX during the draw that took place on October 29.

The married couple matched all of the winning numbers during the mentioned draw and will now be in a position to do many things that they would never have been able to do had they Kenneth Salter not decided to go out on a limb and by a ticket. The couple, which hails from Telkwa, approached the British Columbia Lottery Corporation’s Kamloops offices in order to claim their prize money, which effectively called off the operator’s search for the lucky winners.

But as for how it all came to be, the couple tells an interesting story. According to Kenneth Salter, he had won CA$20 during a previous draw and had decided that it might be a good idea to use his lucky money to try and get in on more lucky Lotto action. And so it was decided that he would try and get in on some Lotto MAX October 29 money.

Kenneth Salter tells the story of how word had gotten around that a previous big winner lived in the Stikine region, and so it made perfect sense to be buying his and wife Susan’s ticket from the Tyee Market in Smithers. But even though Kenneth Salter had obviously put some serious thought into his winning-making Lottery strategy, he still did not see it coming and upon having discovered that he and wife Susan were officially brand-new millionaires, he recalls having gotten the physical shakes out of utter disbelief. Now spurred on anew by winning the big money, the Salters returned to the retailer the very next day in order to make sure that they were in fact in on the action for future draws.

More Where That Came From

But the Salters weren’t the only ones to have gotten their sticky little mitts on some serous Lottery boodle. James Russell from Vancouver became an instant millionaire when he matched it lucky during the November 1 Lotto MAX draw. Russell has big plans for his new money, including a dinner with friends and a vacation trip to Ireland.

Play at Spinland Casino! Never miss out on being a WINNER