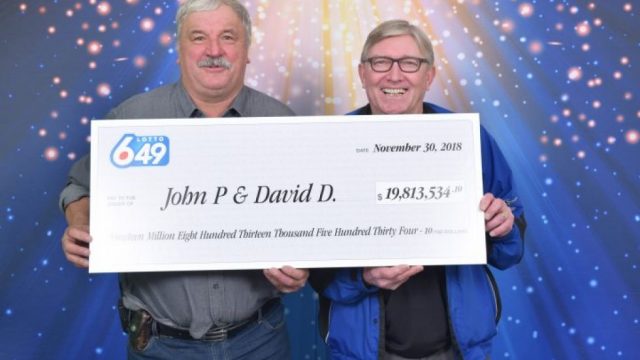 Never did John Prpich and David Dubbin, two long-time childhood friends from Nanaimo, BC ever think that they would win a life-changing lottery jackpot – and even less one that would be shared equally between them.

However, that is exactly what has come to pass for the two Canadian pals. Dubbin and Prpich recently scored a $19.8 million jackpot in the most recent Lotto 6/49 draw, and are now looking forward to a brand new lease on life… together, as always!

The pair of pals purchased their winning ticket from a 7-Eleven in Nanaimo’s Bowen Road in the hopes of scoring a couple of thousand dollars to add to their Christmas piggy banks this year. However, last Friday, they took a trip to the BC Lottery Corporation’s head offices to pick up a giant check for a much greater sum: something that neither of them was expecting to do in their lifetimes.

According to David Dubbin, upon realizing how much he had won, his first thought was that there was no way that John would ever believe his phone call telling him the news. And indeed, it did take quite a bit of convincing before Prpich genuinely believed that he and his friend had become millionaires practically overnight.

In a fantastic stroke of luck, the pair of lotto players matched all six numbers for the prize revealed in the November 28, 2018 Lotto 6/49 draw.

Dubbin and Prpich grew up together in the city of Nanaimo, playing countless games of hockey together over the years and bonding through their mutual love of the sport. For the past 30 years now, the duo has also been buying lottery tickets together in the hopes that one day, they might just be able to get lucky.

Plans for Travel and New Homes

Commenting on the win, Prpich said that he was very glad to tell his kids about the win. Now, he noted, they are ‘going to be OK’ – and no doubt well provided for, too. College, travels and many other necessities will all be much easier to obtain now for the British Columbian father.

The two friends are reportedly planning to buy new homes, cars, and plenty of plane tickets with their winnings. Dubbin was already planning to retire in January of 2019, so the jackpot came at a very fortuitous time for him as well.

He is also a passionate golfer, and is keen to start playing at exotic destinations like Thailand in the near future. He confessed to always having wanted to go to Thailand due to their ‘fantastic’ golf courses, and now he can even fly first-class to complete the experience!

Prpich and his wife, on the other hand, also love to travel, and are planning a trip to Australia soon. First, however, he plans on going to work just a few more times before he retires. “Just for bragging rights,” he says.

Get ready to change your life! Play the lottery and see if you can WIN!