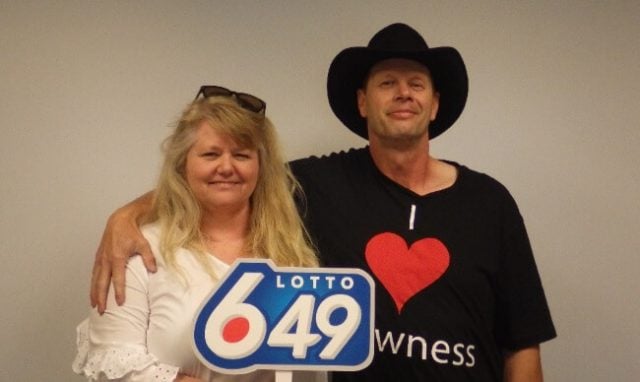 When Lotto enthusiasts and business owners Kim and Michael Verkerk, regular Lotto Max and Lotto 6/49 players from Sundre (Alberta), got back home on the day of their having purchased a ticket that would ultimately turn out to be worth CA$14,900,823.50, they didn’t make too much of the event, not even after the draw had taken place. They were, after all, regular players who had witnessed their parents buying Lotto tickets before them and for as long as what their collective memories served. It was something they did, and something they would in all likelihood keep on doing for as long as what they remained able.

But regular doesn’t necessarily mean that one grows completely complacent about winning or not winning, as evidenced by Kim having woken up around midnight on the evening following the draw, and suddenly remembering that she had not yet checked her ticket’s numbers.

Thanks to a special smart phone application that had been developed by the bright tech-minds at the WCLC especially aimed at making the task of verifying numbers so much easier, Kim was able to instantly run the couple’s ticket against the draw numbers, despite the fact that she had only just emerged from a deep middle-of-the-night sleep.

At first, recalls Kim, the app seemed to indicate that no results were at the time available for the most recent Lotto 6/49 draw, being the draw for June 15th. Kim however, being the business-minded person that she is, wanted to make double sure of the no-result, and proceeded to verify the couple’s ticket on the WCLC’s online website.

Lucky shot that she did so too because Kim soon discovered that not only did she and husband Michael have in their possession a winning ticket, but that they were now officially nearly CA$15 million richer. Kim quickly summoned sleeping spouse Michael from the comfort of the couple’s bed and informed him of their super-lucky landfall. So incredible did winning millions seem to the lucky couple that they proceed to refresh the online site a number of times before their good fortune finally sunk in.

They Plan To Build The Business

But now that they’ve won, how do they plan to spend their new fat fortune? Having waited some time before they approached the WCLC in order to claim their money, the couple must have put some thought into their future plans.

But it won’t be all party and no business for the lucky pair. A family holiday may be on the cards, say Kim and Michael, but the bulk of their winnings will be invested in their mutual business interests.

Is winning the Lotto in YOUR future? You’ll never know if you don’t BUY A TICKET!