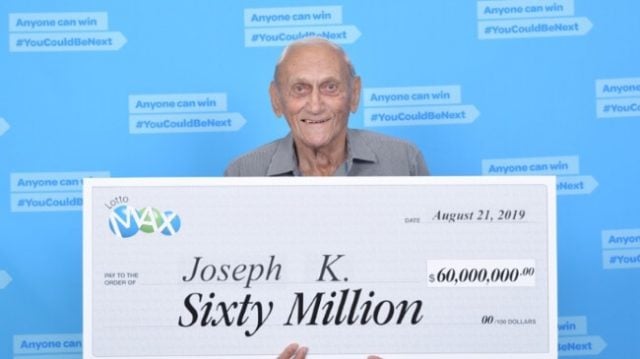 Its official, the search for the winner of the largest ever Lottery jackpot ever won in British Columbia is finally over. For nearly a month, the BCLC went at it on every conceivable public platform, reminding ticket holders to check their numbers and prompting the rightful winner of the incredible CA$60 million jackpot to come forward to claim his or her prize money. And what a shame it would have been if the largest prize money ever awarded were to eventually remain unclaimed. But thankfully, this won’t be the case.

The winner is none other than a former commercial fisherman. And best of all is that Joseph Katalinic knew all along that he had won the money! So why did he not step up and claim immediately? According to an elated Katalinic, his daughter had told him that there really was no need to hurry.

Enough To “Go Nuts” About

But what exactly went down the moment the Richmond B.C. resident discovered that he had won? By his own admission, Katalinic “went nuts”. He recalls having scanned the ticket first at the store where it had been purchased. It all seemed to be so incredible and utterly unbelievable that he ended up scanning his ticket at two more stores before he even dared to begin to believe that he had actually won CA$60 million.

After the big realisation had eventually set in, it was time to calm his tattered nerves, recalls Katalinic, and a straight-up Scotch whisky proved to be just the thing to do the trick. After consuming his chosen nerve-calming tonic, he returned home and conveyed the good news to the rest of his family. He told his oldest daughter first and this sparked an emotional outburst involving a lot of hugging and kissing and even crying, recalled the retired fisherman at an official BCLC press conference on Wednesday. His animated description of his daughter “crying like hell” incited laughs from BCLC representatives as well as from the media.

He Wants To Live A King’s Life

But to what extent will life chance for the retired Richmond resident now that worrying about money is a thing of the past? For the past two decades he had been living a quiet life, said Joseph Katalinic. He retired two decades ago and not much in the way of excitement had happened since. But now that he’s won CA$60 million, he plans to live the life of a king.

The retiree plans on taking his entire family to Hawaii for a much-deserved vacation and also intends to visit the town in Europe where his parents were born. Now that’s money well spent, and best of all is that there’s a lot more where “that” came from.

Play on the best paying online jackpots in Canada, you could be a big winner!