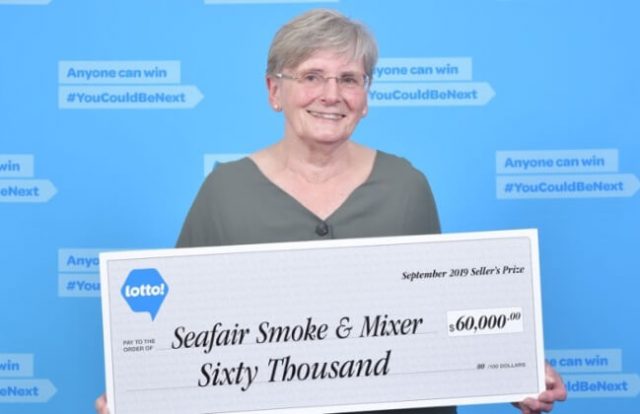 B.C. resident Verna Holmes owns the Seafair Smoke and Mixers smoke shop on No. 1 Richmond and has been serving the local retail market for going on all of 35 years. Which makes it all the more special and befitting that she should have been the business owner to have fallen onto the good fortune of having sold the biggest jackpot Lottery ticket ever cashed out by the BCLC. But not only is Holmes now regarded as a true honorary member of the BCLC’s Lotto community, she’s also just recently come into some unexpected money of her own because the operator has written Holmes her very own jackpot money order worth a fantastic $60,000!

Holmes, who just so happens to have been a local Richmond retail business owner even before the BCLC was established, was awarded the special cash prize as her reward for having sold the winning ticket to retired fisherman Joseph Katalinic. And what with Katalinic’s jackpot being the biggest ever rewarded by the BCLC’s popular Lotto MAX thrice-weekly draw, Holmes is now officially the beneficiary of the biggest retailer-reward ever handed down by the operator.

According to Holmes, she just somehow “knew” on the day that Katalinic walked in to buy his $60 million jackpot prize ticket, that she would that day be selling a big-win ticket. She said that she had hoped at the time that she would end up selling a jackpot ticket to a good friend and that Joseph Katalinic turned out to be as good a friend as any on that particular day.

Katalinic had over the course of many years been a regular customer at her store, said Holmes, and to her, this made the retiree especially deserving of the life-changing win. Katalinic had been exceptionally diligent in purchasing his weekly ticket, said Holmes, despite his having struggled with a severe knee injury.

When questioned about how she planned on spending her winnings, Holmes declared it to be her secret. She did at least reveal that she would not be closing up shop or selling shop or even retiring anytime in the near future because according to Holmes, she absolutely loves doing what she does for a living.

No surprises there, especially not when working at one’s day job means spreading jackpot-style happiness.

Try YOUR luck at slots Enter ONLINE and see if YOU can hit the JACKPOT.