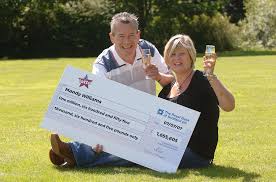 It took almost 2 years for the winners of the $50 million Lotto Max ticket, sold in Langley in March, 2014, to come forward.

Friedrich Mayrhofer, 67, his wife, Annand, and his son, Eric, have been named as prize winners of thesecond $50 million jackpot in B.C. history. The family hesitated to come forward, preferring to claim the prize while remaining anonymous. That's against British Columbia Lottery Corporation (BCLC) rules, so days before the ticket was set expire on its one-year deadline, the Mayrhofers stepped forward to identify themselves and collect the prize.

The family has signed over the ticket to a trust and the beneficiaries of that trust will, as per the family’s request, remain unidentified. During the months of legal wrangling the trust tried to claim the ticket but BCLC rules state that only an individual, or a group of individuals, can claim the prize so the family was forced to step forward and identify themselves.

Mayrhofer plans to invest the money and has a team of investors picked out. Other plans include taking a vacation, renovating their home and buying some new furniture.

Mayrhofer, who has been married to his wife for 42 years, has three children. His son Eric is the only one who is named as co-claimant of the prize.

"It was completely unexpected, but it was a nice surprise," he said of the win.

Mayrhofer said they will be investing the money and already have a team of investors picked out. They will also be renovating their home, buying some new furniture and maybe taking a vacation, but other than that, will live life quietly and modestlyandwill continue with their lives as normal.

Mayrhofer has actually won the lottery twice previously — approximately 30 years ago he won $1,000. A photo of him with the cheque is still taped to his fridge. He won a second prize of approximately $3000. "When I claimed the $3,000 I told the clerk at the prize claim counter that I would see her again," said Mayrhofer, "but I never imagined it would be for a win this size."

The Mayrhofer claim invalidates the lawsuit filed by a woman who works at Shoppers Drug Mart in Burnabay. She filed a civil claim in the BC Supreme Court, claiming that her coworker hid the unclaimed $50 million Lotto Max ticket which had been purchased as part of a workplace pool.

Gayleen Elliot sued Dalbir Sidhu for breach of contract and fraud and asked for $52 million dollars.

In her suit, Elliot claimed that she, Sidhu and additional Shoppers Drug Mart employees formed a weekly lottery pool in which each of the 8 members would contribute $5 to play the Lotto Max and occasionally Lotto 6/49. The members of the pool would specify seven numbers to be played each week for the Lotto Max draw and would allow 4 sets to be determined by a Quick Pik random selection.

When Elliot found out that the winning ticket had been purchased in Langley and remained unclaimed she asked Sidhu, the group’s designated buyer, to show her the tickets. Sidhu said that he had forgotten purchase the tickets in March due to family engagements. Elliott claimed that Sidhu was in fraudulent possession of the March 14 tickets and believes that one of those tickets is the winning Quick Pik lottery ticket and that Sidhu kept that ticket for his own benefit.

The appearance of the Mayrhofer family with the winning ticket has invalidated Elliot’s claim.

The $50 million prize was also contested in court by George Wilson-Tagoe, a retired accountant, who said that he bought the winning ticket on March 11th 2014 and then lost it. Following the payout to Mayrhofer, Wilson-Tagoe filed suit, saying he is the rightful winner of a $50-million jackpot prize.

In a notice of civil claim filed in B.C. Supreme court, Wilson-Tagoe of Maple Ridge claimed that he purchased the ticket from a gas station at 202nd Street and 88th Avenue in Langley on his way to work but later lost it.

His is only one of 739 different claims that was made to the ticket, says BC Lottery Corporation spokeswoman Angela Koulyras. She notes that the corporation carefully reviewed all of the claims before awarding the prize to the Mayrhofers. "Throughout this process BCLC was guided by maintaining the integrity of the lottery system, which we uphold by ensuring prizes are paid to the right people," Koulyras said. She said that she could not comment on the specifics of the case, but that the agency will be filing a defence against the allegations.

Wilson-Tagoe says that he bought the ticket in March 2014 and then couldn’t find it. He said he had scanned the ticket and noticed an unusual pattern. Subsequently, he lost it — possibly throwing it in the trash with old tickets. “I looked everywhere for the ticket. Couldn’t find it,” he is quoted as saying in court documents. Wilson-Tagoe says that he called the B.C. Lottery Corporation and told them what happened. Mayrhofer could not be immediately reached about the legal action against the lottery corporation or against the attempt to take his prize.