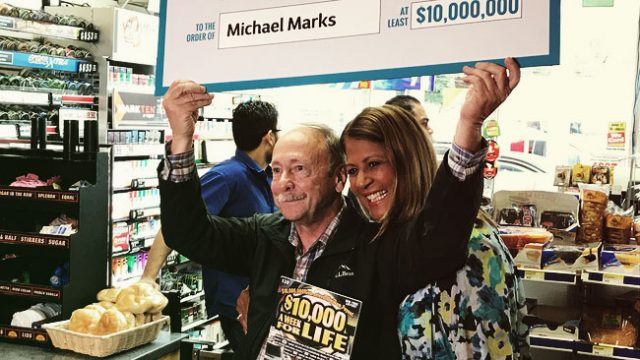 Over in the USA, a 66-year-old man who has been playing the lottery practically his entire life has struck jackpot gold. The Hartsdale, New York native has become the state’s newest lotto-made millionaire, pocketing an instant cash windfall that most others will only ever be able to dream of!

Michael Marks is the name of the extremely fortunate winner who struck a $10 million prize on a $10,000 a Week for Life scratch card ticket. He purchased the ticket in question when he popped in for a quick cup of coffee at A-Plus, according to the local lottery supplier in NY. The company also revealed that the player buys a ticket religiously every day – which could very well have something to do with his enviable luck, statistically speaking.

Are you ready to win the jackpot? Play Bingo NOW!

Winner Comments on His Luck

Speaking to the New York State Lottery about his win, Marks noted that A-Plus ‘is his store’. He reportedly goes in each and every day for a cup of coffee and his scratch-off tickets – a habit which has finally paid off after decades of sticking to it, no matter what. However, according to Marks, on the day he bought his winning ticket, he already had a hunch that he would win something huge.

Recounting his experience, Marks revealed that the machine lit up, saying ‘big winner – see lottery agent!’. He then asked the retailer if he could borrow a pen, quickly locking himself in the bathroom to sign his ticket just in case. A few minutes later, it was confirmed that he had indeed struck a massive win of $10,000,000 in total.

From here on out, Michael Marks will be receiving installments of $520,000 each and every year, before required concealment as governed by the state. The sum is certainly enough to keep the winner, who is of retiring age, comfortable for the rest of his life, not excluding a few extra luxuries like travel, a new home, or a flashy sports car to celebrate his windfall.

Commenting on his luck, Marks has noted that it really is amazing that he has won. According to the ecstatic new millionaire, he has not yet given much thought as to how he will be spending his money. Right now, he says, he simply plans to enjoy his life and work out the finer details as he goes along!