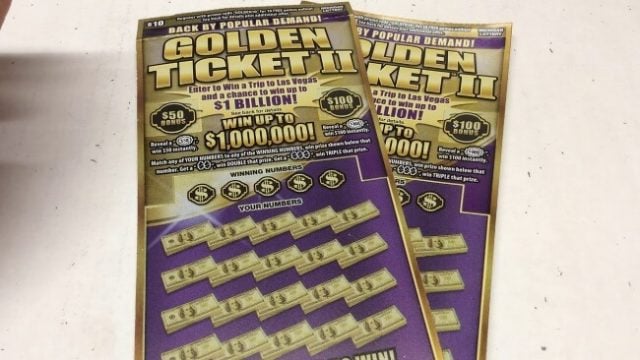 A man from Lansing enjoyed the feeling of having won $100 in an instant Lottery game so much, that he purchased another ticket during the following week. Good job that he did too, because that time round the player, who has requested to remain unnamed, won a whopping $1 million in the Michigan Lottery’s Golden Ticket II game.

Many Lottery winners have reported the very same thing; feeling lucky to the extent of experiencing a pressing need to go out and buy that golden ticket. And worth their weight in gold these tickets definitely are! Our lucky player purchased his winning ticket from the Admiral Station in Grand River Avenue, Lansing. The actual purpose of the detour was to buy a soda pop, recalled the player. What a happy occasion that his shopping list included an instant win Lottery ticket too!

The lucky player says that he could not believe his own eyes when he saw that his ticket contained a match. But even more unbelievable was the fact that the lucky matched number 3 revealed that he had in fact won the grand jackpot of $1 million big ones.

This too, is nothing unique. Players often tell the story of how they had never expected to ever win prize money to the tune of a million dollars. To most players it comes as a shocking surprise and it takes a while to sink in at first.

The 28 year old plans to spend his cash windfall on doing a bit of travelling, and saving the rest for a rainy day. The player opted for the lump-sum payment option and will receive net winnings totalling $634,000.

Millions Won In A Year

The Golden Ticket II Lottery game was launched about a year ago, and to date, according to Lottery officials, $29 million in cash prizes have been won. Officials have also said that another $1 million cash windfall remains unclaimed. Players are constantly being urged by Lotteries all over the country to regularly check their tickets for a win.

Unclaimed winnings are only available for a set period of time, which is generally 12 months, after which those tickets are scrapped and the money re-routed back into the Lottery system. Unclaimed money is used to boost future jackpots and in some cases, distributed among the Lottery’s charitable beneficiary organisations.

Are YOU the NEXT BIG WINNER? Enter the Lottery and try your luck!