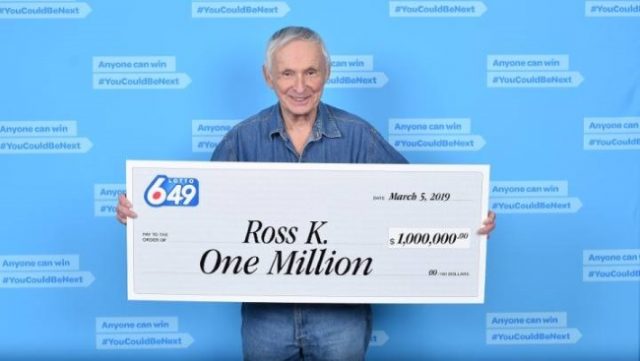 Life’s pleasures are all around us, and more often than not, they are surprisingly small. But what brings us joy is a very personal matter and it’s not the same for everyone. Just ask Ross Kulak from Kelowna.

A man of simple means, Kulak has been allowing himself the tiny guilty pleasure of playing 6/49 Lottery quick picks for as long as he can remember. Judging by the way in which he tells his story, it’s not as if the humble man who describes dancing as being one of his favourite pastimes, ever really expected to win. Not more than just enough to help pay for his mid-day lunch, in any event.

Imagine his surprise when he recently discovered that he had won a super $1,000,000 windfall playing, you guessed it, 6/49 quick picks!

Kulak animatedly tells the story of how he had headed down to his local supermarket to buy lunch and had on a whim decided to check whether he had won even just a small amount that could be put towards contributing to his purchase.

But, says Kulak, what transpired next, even when seen, wasn’t to be believed! Perhaps it was the hooting and hollering coming from the small crowd of people behind him that finally convinced our man that the fact that he had won a smashing sum of cash wasn’t a dream after all.

Talk About A Perfect Ten

What Ross Kulak’s quick pick had managed to predict was nothing short of incredible. One of Kulak’s tickets had perfectly predicted all 10 of the numbers that was to come up in the February 27 guaranteed prize draw. The winning ticket had been sold to the lucky winner by Peter’s Your Independent Grocer, which is situated at the Capri Centre Mall.

When asked about his plans now that he was sitting quite pretty in the money, Kulak seemed quite sure of the fact that he had no big plans for how he intended to spend his riches. But, he pointed out calmly; it certainly would be nice to go to dinner with a few friends.

And who knows, quipped Kulak, the winnings may even help to settle the dinner bill! If there’s one thing that Kelowna’s newest million-dollar winner doesn’t need, then it’s a new sense of humour. Unlike a fancy dinner, that’s one thing that cannot be bought.

Not that Kulak would have had to.

Are YOU a winner? Play Slots and see if you can change YOUR life!