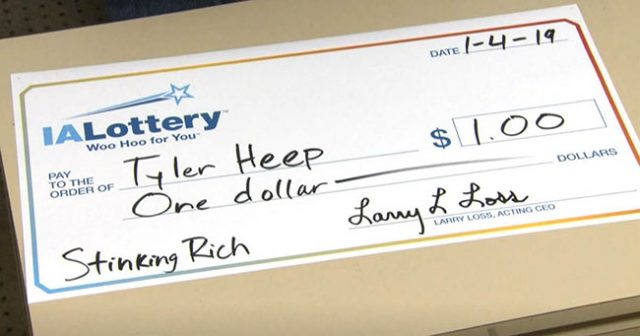 Lottery jackpot winners are usually given the royal treatment the minute their wins are confirmed. Most of the time, the winners in question have indeed become overnight millionaires, or the new owners of thousands of dollars at the very least. With that said, Tyler Heep’s story is a little bit different.

Heep, a man hailing from Iowa over in the US, has received the millionaire treatment after cashing in a lucky ticket as well. However, the most noticeable difference between the IA local and other winners is that Heep managed to win a princely sum of… $1.00.

Yes, that’s right – a single dollar. Tyler recently purchased a Stinking Rich scratch ticket at one of his state’s retail outlets, only to cash it in and discover that he had won one of history’s most modest windfalls. Fortunately, the player decided to have some fun with his fortune anyway.

In a Facebook post, Heep (a resident of Urbandale) told his friends that he had just come back from the state lottery office. He admits that he figured it would be ‘worth a shot’, and that his loved ones all thought that his jackpot was hilarious. In his own words, he is surprised that nobody else has done what he has before.

The Iowa gambling authority was only too happy to present the player with an oversized novelty check and to snap photos of him with it against their special winners’ wall. Officials confessed that they never hesitated to play along with Heep, noting that it “is a winning experience, after all!” They even thanked the Urbandale man for reminding everyone around him to have a bit more fun in life.

All the Prize Money Already Spent

To top it all off and play along with the winner, a local store soon offered to frame Heep’s souvenir check to remind him of his less-than-exceptional luck. One of his friends on Facebook even took to his post to warn him about relatives coming out of the woodwork once they discover that he has won a lotto jackpot.

Of course, any jackpot winner gets an interview with local authorities as part of their millionaire treatment, and Heep was no different. He was thrilled to sit down and discuss with the media exactly what he was planning to do with his newfound fortune.

The cheeky punter revealed in the interview that all of his prize money was already long gone. When asked what he spent it on, he admitted that he had blown it all on half a gallon of gas for his car. You had better establish an investment account next time to avoid the same fate, Tyler!