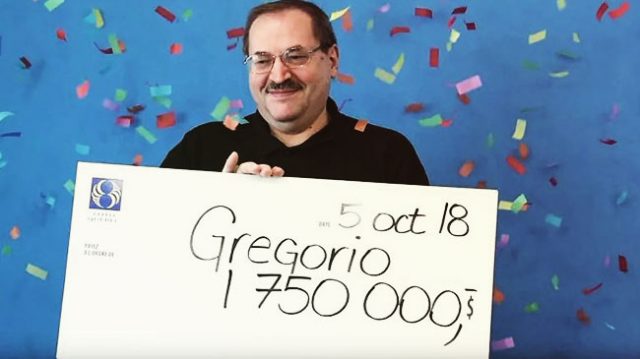 A man hailing from Montreal was cleaning out his closet looking for old clothes to donate, when he stumbled upon a lottery ticket that he had bought in December last year. It was tucked in to the pocket of an old jacket, and thanks to heeding the advice of his sister and getting the numbers checked, Gregorio De Santis is now $1.75 million richer!

The jackpot draw took place on the 6th of December 2017, and was totaled at $7 million and divided up into 4 parts. The Loto-Québec website states that claims are possible for 1 year from the date of the draw printed on the purchased ticket, or 1 year from the launch of the product in the case of a scratch ticket. So De Santis was doubly lucky in finding it when he did, since he had only 2 months left to claim his prize.

De Santis decided to see if the ticket was worth anything, thinking he may have lucked out and scored a few extra dollars. When he got the 6/49 ticket validated, he initially thought he’d won $1 750, a not inconsiderable amount at all, but 1000x less than his actual win.

People forgetting about or losing lotto tickets actually happens quite often, and no lottery organisation is obligated to honor a missing ticket, even with definitive proof of purchase. This is why more and more people are starting to play the lottery online, since no physical ticket is required in order to do so. When playing online players have their digital details stored safely, which removes the possibility of a win being missed.

More Hockey and a Retirement Plan

De Santis said that his heart skipped a beat when he found out about his win, and he is still very obviously trying to take his new millionaire status in. He has given full credit to his sister for making him clean out his closet, and, besides organizing his retirement plan, he is going to have to think about what to do with the windfall. As is the case with most Canadians, De Santis is a huge hockey fan, and one thing he says he is definitely going to be doing is attending a lot more games with his nephew, as now, the ticket price will be no problem.