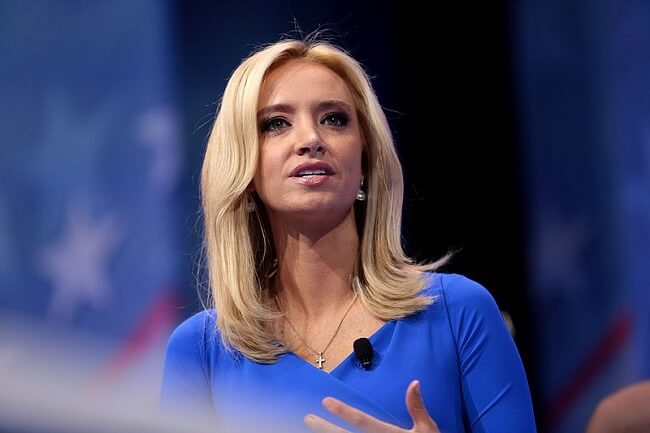 U.S. President Donald Trump is hogging news headlines yet again. The businessman and former Apprentice reality-TV star now turned president continues to lead one of the most controversial White House communications operations to date, having just hired one of the most controversial voices in U.S. politics at the moment as his new White House press secretary. The fourth switch to date under the leadership of his administration, to be exact. “You’re fired” seems to be a term held particularly dear by Trump, and not only when playing hire-and-fire games on entertainment TV.

Controversial U.S. figure and spokesperson Kayleigh McEnany officially replaces former secretary of press Stephanie Grisham, who incidentally, has now become the first secretary of press in the history of U.S. politics never to hold a formal briefing for the press. Grisham served only 9 months in office. McEnany was formally appointed by Trump’s (new) chief of staff, Mark Meadows, himself a former Republican.

The fact that the latest press secretary to be appointed by the Trump Administration turns only 32 in a little under a week serves to add even more controversy to the already volatile situation. McEnany, following various projects and online antics in Republican politics, eventually joined Donald Trump’s re-election campaign and has since been a passionate defender of the U.S. President’s unique style of leadership.

McEnany seems to be a resolute and fully committed believer in Trump’s self-professed love of the truth. She last year during a stand-offish type of interview with CNN anchor Chris Cuomo, made it clear that to her mind, Trump never lies. Instead, insisted McEnany, it’s the press who lies. She also famously referred to Trump’s former impeachment proceedings as a “coup against a sitting president”.

McEnany famously told Fox Business as recently as February 25 that “we” will not see diseases like the coronavirus come to the U.S. She then likened the Trump administration to the Obama administration, referring to last-mentioned as an awful type of presidency. Ironically enough, given her knack of being quick on the tongue and the tone, McEnany describes herself as a devout Christian and a small-town girl from Plant City, Florida.

Grisham will in turn make her way back to the East Wing, where she will assume the role of Melania Trump’s chief of staff and official spokesperson. The first lady has since the announcement said that she is very excited to be in a position of welcoming Stephanie back into her team in a brand-new role. She described the incoming chief of staff as a mainstay and someone who led the administration even before day one. Whatever that means.

Grisham spoke to a representative from The Axios late last week and said that the true irony of the matter of Trump being on the look-out for a new press secretary was that she (Grisham) had heard about her removal from the press. She did at some stage during the conversation ad that she had been in quarantine for a time, alluding to the fact that it was probably not all that outlandish that she would have missed the decision having been taken by the palace in the first place.

When did Kayleigh McEnany become a national spokesperson for the Republican National Committee?

Where is Kayleigh McEnany from?

When was Kayleigh McEnany born?

Sign up at a CANADIAN online casino. Play to win anytime YOU choose.