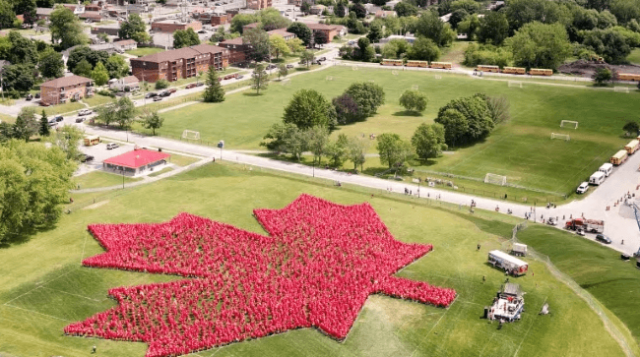 There is nothing that says Canada and everything the country stands for than the iconic maple leaf. Which is why the municipality of Trenton, Ontario now has every right to brag and celebrate. The municipality is now officially the older of a brand new Guinness World Record after having constructed the largest human maple leaf in history.

It all happened over the Canada Day long weekend when a crowd numbering nearly 4,000 people in size convened at a local park in Trenton, with each member of the crowd sporting a bright red t-shirt. The event was hosted as a fundraiser for the benefit of the Canadian Armed Forces charity, and was attended by a Guinness World Records representative who had issued a certificate in order to cement the momentous occasion in the pages of history.

The human maple leaf absolutely smashed the 2017 record that had been set up by Grouse Mountain, British Colombia (1,589 people). The organisers of the event said that despite the fact that they had hoped and aimed for 5,000 people, they remained grateful for the 3,942 people that did turn up in order to participate in the world record event.

A Very Visual Thank You

According to event organiser Mike Eden, the event presented the perfect opportunity to show appreciation to Canada’s military. Celebrating Canada Day made it all the more special, said Eden, who also pointed out that the visual representation was intended to be seen as a token of deep and heartfelt appreciation towards all who continued to serve the country in a completely selfless manner.

The event also served as a means to raise awareness about and funds in favour of the country’s Soldier On initiative. The initiative provides financial and other support to retired military veterans as well as to current military personnel suffering from physical as well as mental injuries and illnesses as a direct result of their valiant service to the people of Canada.

Supporting Those Who Serve

Military veterans often find themselves out of a life and even out of a livelihood upon returning home after service to a country. Initiatives such as one driven by Soldier On are vital in order to provide hope to those who no longer feel as if there is a place in society to call home, despite having served that very society in the most selfless of ways possible.

Soldier On provides much-needed support to ex and current military staff as well as to their respective families.