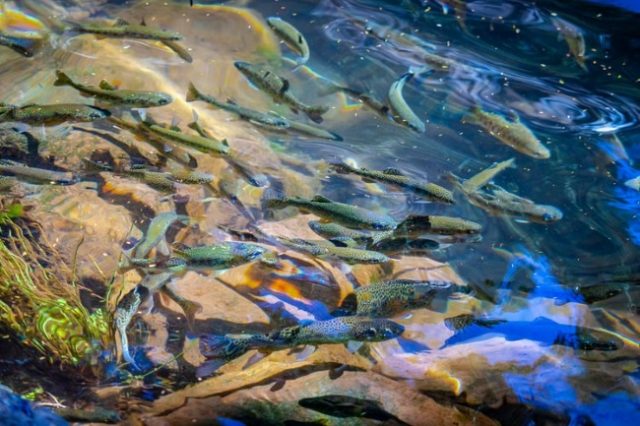 An interesting Vancouver Island discovery has led two scientists to believe that climate change has taken its toll on the landscape surrounding and including the Cowichan River. Victoria University PhD biology student Will Duguid and Andres Araujo, biologist at the Department of Fisheries and Oceans, have discovered a hybrid fish in the river, and one that is essentially the by-product of cross-fertilisation between Coho and Chinook salmon.

Significant too is the fact that the fish discovered by the duo are second-generation hybrid fish, meaning that they are off-spring of other hybrids between the two salmon species. Araujo explains that in order for hybrid species to come into existence, an anomaly will have taken place with regards to an overlapping of the time and actual location (grounds) of spawning. Such an overlap event is caused by extreme changes in the environment, such as a watershed drought event, which is of course brought about by severe seasonal changes.

Chinook, says Araujo, traditionally spawn during the months of September and October, and coho towards the end of October and well into December. Chinook spawning season was in all likelihood pushed back into coho spawning season as a result of unusual and extended summer droughts, in which case a biological event such as the one that has caused the hybrid salmon species will have come to pass.

According to Duguid, despite the fact that some species such as rainbow trout and cutthroat trout regularly produce hybrids, a hybrid event relating to wild salmon has never before been recorded and especially not all the way into a second generation of fish.

A member of the Cowichan tribe, who had spotted the unusually scaled fish in the river during an adult fish tagging conservation study, apparently initially made the discovery. Hybrid fish generally present with unevenly patterned scale arrangements.

In the case of the wild salmon crossover, the hybrid’s scales aren’t evenly arranged on either side of the lateral line and so it would not have been too difficult to spot the anomaly with the naked eye. Duguid said that the uneven arrangement of scales would in all likelihood not be the only anomaly; it’s just that this is the immediately visible anomaly. He said that there are likely more anomalies below the surface.

In the case of the latest discovery, the anomalies were most likely caused by forestry practices in the area, which would have led to a disturbance of the region’s climate balance and eventually a spell of drought.

Reel in a BIG win. Play the most REWARDING casino games online NOW!