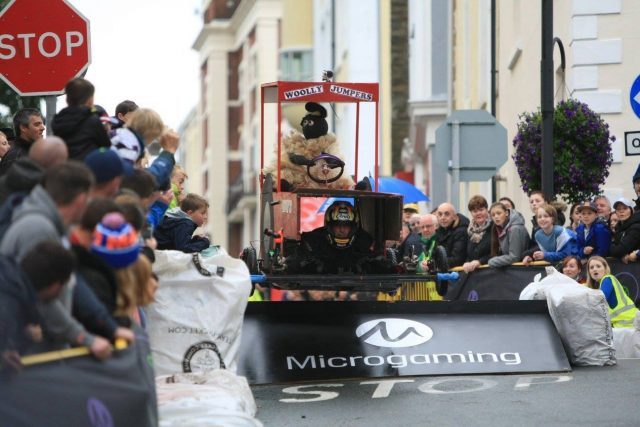 Isle of Man-based software giant Microgaming is renowned for the development of high quality games, and the team strives to bring new ideas to life with their superb range of slots. But the company isn’t only interested in looking after its own interests and keeping its own players happy and entertained. This is very much a people-centred organisation and its highly successful PlayItForward initiative attests to the fact.

Every year, the project PlayItForward initiative returns to the thrilling slopes of Douglas for the annual Soapbox Race, and next year’s event, which will be the fifth of its kind, promises to be bigger and better than ever before.

Since the inaugural event in 2014, the PlayItForward Soapbox Race has raised more than £11,000 for local charity, Hyperbaric Isle of Man. This year, Microgaming had the pleasure of handing over £1,984 in charitable proceeds, and a fun day was had by competitors as well as spectators.

True to the tradition of soapbox races, all of the karts that participated in the race were hand-made. The route was constructed along Upper Church Street towards Barrack Street, and the velocity of the karts depended very much on the downhill slope and sheer gravitational force! The 24 gutsy drivers had to navigate everything from steep and precarious turns to heart-pounding leaps and jumps.

The winner of this year’s race was a driver by the name of Generally. Generally chose to take on the slippery slopes strapped into a bright orange kart and finished the race in an impressive 25.73 seconds. Short on Generally’s heels was Dellisimo, having racked up an equally thrilling time of 25.83 seconds. Last of the Summer White came in third, followed by Team Chaos in fourth place.

Event organiser Elliott Moore was full of praise for Microgaming’s PlayItForward initiative and said that the annual event would be nowhere near as successful as what it is today without the developer’s sponsorship and general backing. Moore also thanked media partner 3FM as well as various supporting sponsors such as Newsbeat, SAS Events, Southern Young Farmers, and ELS.

The most exciting bit is always to see just how creative the competitors have been when they arrive with their karts. For most competitors, the design of the kart is every bit as important as its ability to rake in the titles, and they take great pride in their creations.

The 2019 installment of the event will take place on Saturday, August 31st.

Are YOU ready to win? Play slots, table games and more online NOW!