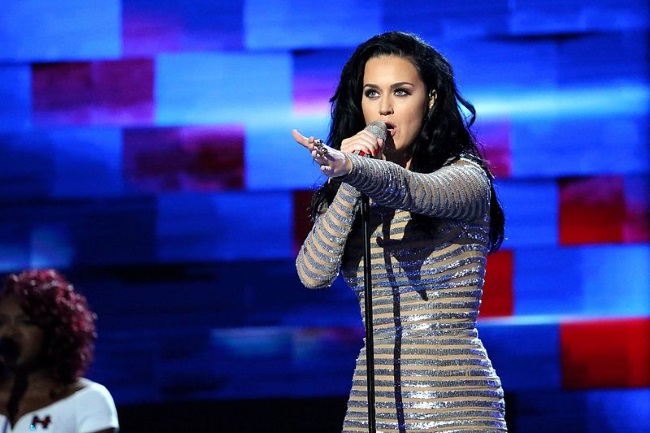 A four-second teaser clip is all it took to convince Katy Perry’s fans that she may in fact be pregnant. The 35-year-old music superstar teased her latest music video “Never Worn White” on Twitter and Instagram earlier on this week and in the video, Perry can be seen donning a flowing white long-sleeved gown. But more telling than the flowing maternity-style gown is Perry cradling her stomach much in the same way as would a new mom-to-be a bun in oven.

That was all it took for fans to begin speculating about the fact that their favourite artist may be pregnant with “Baby Bloom Perry”, in reference to possible dad-to-be Orlando Bloom, who is Perry’s fiancé. Some speculated whilst others chose to just come out with it and ask, “Are you pregnant?”.

Bloom Gave It Away Last Year

The fact that fiancé Orlando Bloom last year spoke quite openly about his wanting more children and this time round with Perry, fresh still in the minds of fans, only served to fan the fires of speculation even further. Bloom during an interview with Howard Stern offered to fans a glimpse into his personal desire for more children, saying that he loved kids and that fiancé Katy happened to be great with children.

Bloom then said in so many words that the prospect of having kids with Perry was a wonderful thing and that the couple were in fact at the time “shooting for that”. Bloom and Perry do not yet have any children together – with the operative word being “yet”.

Beyoncé And The Flowers

But the flowing white attire and baby-cradle movement weren’t the only clues indicating that something new-born may be up. Fans quick on the uptake immediately made the connection between another outfit worn by the singer in the teaser video, being that of an elaborate floral creation.

The comparison was immediately made with Beyoncé’s 2017 floral pregnancy photoshoot, at the time of the singer having expected Rumi and Sir (twins). But even so, Perry’s caption written about the music video teaser made absolutely no reference to a possibly Bloom-Perry baby being part of the near-future.

The possibility obviously existed (up to a point at least) that Perry’s video was nothing more than a creative analogy; baby or no baby; and that it had diddly squat to do with a real-life pregnancy or baby. Some fans were quick to point out that Taylor Swift dressing up as a man in her new music video didn’t mean that the singer was headed for a sex-change.

But as it turns out – fans were this time round, right on the money. Perry minutes after the world premiere confirmed that fans had been right all along, and that she and Orlando Bloom were expecting their first child. Perry broke the news to fans on Twitter, saying that it was a relief not to have to “suck it in” any longer. Perry and Bloom previously hinted at planning a destination wedding for this coming summer, but now that a new baby is on the way, it remains to be seen whether or not a massive party will indeed be in the offing.