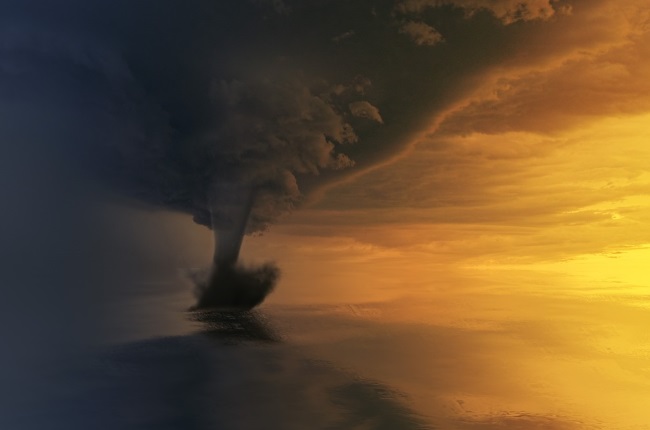 The world – and in particular the U.S. – is in a state of absolute chaos and crisis due to the death and destruction caused by the deadly Coronavirus. And as if a global pandemic threatening to completely destroy entire economies isn’t quite enough, a massive Tornado made its way through Jonesboro, Arkansas, on Saturday, leaving behind even more damage and destruction in its wake as it went.

No fatalities have been reported so far, but at least 22 people have been injured. But aside from human life having been spared this time round, the tornado did clear at least three miles of all buildings, telephone poles and shopping centres. A local mall was severely damaged by the gale force winds. Jonesboro Mayor Harold Perrin described the fact that the mall had been closed at the time of the tornado due to the Coronavirus pandemic as a small mercy and said that had this not been the case, that many more people would have been injured, or worse.

A Great Deal Of Damage

But the “small mercy” doesn’t mean that there won’t be costly consequences as a result of the tornado having ripped through everything from buildings to telephone lines to power lines. In fact, power company Entergy already mere hours after the tornado hit, reported massive power outages and at least 5,245 in number. Fellow electricity supplier Craighead Electric Cooperate reported that 13,949 of its customers were without power.

Various home videos have since surfaced on social media. One video shows the tornado uprooting telephone poles and knocking out all connected wires, along with kicking up a sub-storm of flying debris. Buildings all along the tornado’s path of destruction have been flattened right to the ground and multiple parked vehicles have been overthrown by the wind.

One of the pictures captured by a home videographer showed a completely mangled vehicle in the damaged mall’s parking lot. Pictures of broken walls and debris scattered all across parking lots alongside flattened commercial buildings continued to surface on social media platforms all weekend long.

The storm ripped through Jonesboro at around 5 p.m. on Saturday, according to a weather report issued by local National Weather Service in Little Rock. Mayor Perrin has since announced a curfew and has said that folks are to remain indoors after 7 p.m. in the evenings, in addition to national social distancing rules and guidelines.

Jonesboro Chief of Police, Rick Elliot, has since confirmed that search and rescue teams were in the process of making repeated sweeps in search of anyone possibly trapped under debris or in need of medical assistance in general in the area.

Arkansas Governor Asa Hutchinson has in the meantime announced via his official Twitter account that he is currently paying close attention to the report and developments surrounding Saturday’s Jonesboro tornado.

When was Jonesboro hit by a tornado?

At 5pm on Saturday the 28th of March.

How many people died in the Jonesboro tornado?

As yet, no fatalities have been reported.

What is the Jonesboro curfew?

All citizens must stay in their homes after 7pm at night.

What was damaged in the Jonesboro tornado?

3 miles of buildings and infrastructure, and a mall.

How did Covid-19 save lives in the Jonesboro tornado?

The mall was closed due to lockdown rules, so there were no occupants.