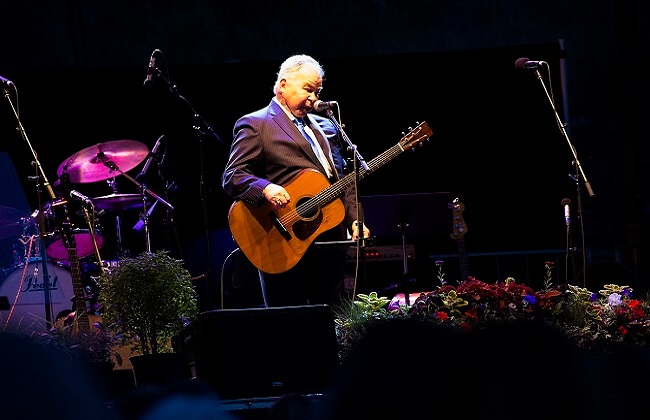 Country and midwestern-folk singer/songwriter John Prine has died due to Coronavirus-related complications after spending a little under two weeks in hospital under intensive care. Pine was, in the weeks leading up to his death, treated at the Vanderbilt University Medical Center in Nashville. His death was confirmed by one of his publicists, who also at the time of the announcement said that the artist had died from Covid-19, the disease caused by the coronavirus.

Prine’s wife and agent, Fiona Whelan Prine, took to social media shortly after husband John was first hospitalised because of his having contracted the virus, and asked for prayers and love to be sent the artist’s way by all who loved him. The Grammy Award-winning singer had apparently suffered a very sudden onset of symptoms associated with the virus and was hospitalised and placed on invasive ventilation equipment shortly after.

Wife Fiona Prime had tested positive for the virus too, but has thankfully since recovered.

A Master Of His Generation

John Prine, who has successfully beaten cancer twice before during the course of his lifetime and career, was considered one of the oldest living performing artists in the country prior to his premature death because of the virus. The artist had prior to his diagnosis and hospitalisation, booked several live shows for the next couple of months.

Prine was considered not only an astute and prolific musician with a flair for addressing the issues of the day, but in fact one of the most influential songwriters of his entire generation. This was yet again reiterated in a statement issued by the Recording Academy shortly after the news of his passing went public on social media and in world news.

The publicist said that John Prine’s impact as an artist, musician and influential public figure, will continue to act as an inspiration to musicians the world over for many more years to come. The company also conveyed its deepest condolences to Prine’s surviving family and loved ones.

A Lifelong Passion For Music

John Prine was born to father William Prine and mother Verna Hamm on October 10, 1946, in U.S. then-small-town Kentucky. His love for music started early on already, having been taught by his brother to play the guitar at 14 years of age. He then began attending music lessons presented by the Old Town School of Folk Music; a genre that turned out to dominate his particular style of music later on his life and professional career.

His was a poignant mix of old folk and country, with a definite influence of classic midwestern culture. So pronounced was his connection to an old-school midwestern way of life, that his music and lyrics have been described by fellow-artist Bob Dylan, as being “midwestern mind trips to the nth degree”. Prine was discovered by none other than Kris Kristofferson after the music great saw Prine performing live at the Earl of Old Town Club. This eventually led to Prine signing with Atlantic Records ahead of the release of his first and self-titled album in 1971.

Prine would often famously speak of his early song-writing antics, writing songs in his head whilst delivering mail working for the U.S. mail system as a young man.

John Prine will be remembered not only as one of the greatest voices and artists of his generation, but also as someone quintessentially and authentically human.

How old was John Prine?

How long did John Prine haveCovid-19 for?

He was ill for at least 2 weeks before he died.

Who was John Prines wife and agent?

Where did John Prine die?

At the Vanderbilt University Medical Center in Nashville.

When did John Prine release is first album?

He released his first album titled John Prine in 1971.