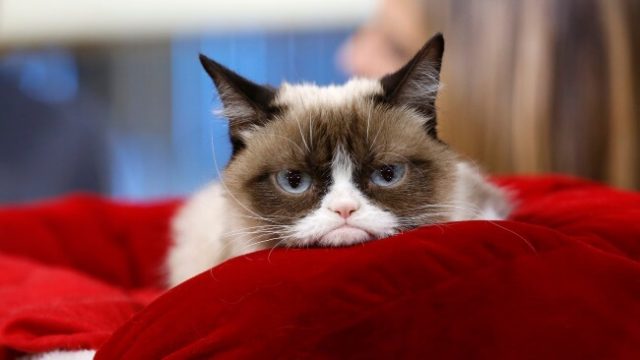 The cat that, according to US news giant CNN achieved more in 7 years than most people do in a lifetime has died. Grumpy Cat’s human family recently took to photo and media share platform Instagram to announce that the Internet’s most disapproving, fault-finding and grumpiest cat; hence the feline’s name; has died at the relatively youthful age of 7 and due to a particularly nasty urinary tract infection.

Grumpy Cat managed to skyrocket to fame in 2012 as a result of her grumpy and ever-judgemental demeanour, and went on to publish books, sign a movie deal and even to acquire her very own fashion line in partnership with a number of established fashion brands, including Sketchers.

Read More… Why The WhatsApp Hack Is A Cause For Concern

A Regular On The Red Carpet

The world’s grumpiest cat was born with a condition known as feline dwarfism and she experienced various health issues as a result of her condition, including being prone to various infections. Grumpy Cat’s life expectancy, according to the experts, had been drastically compromised by her medical condition right from the start, and her premature passing was; albeit very tragic; always a real possibility.

Grumpy Cat had over the course of her short life rubbed shoulders with the rich and famous, including WWE pro-wrestler The Hulk and comic book writer and creator of the Marvel Universe, the late Stan Lee. The famous feline had also starred in her own movie, “Grumpy Cat’s Worst Christmas Ever”.

Away From The Cameras

But what was Grumpy Cat like in real life? According to owner and former-waitress from Morristown Arizona, Tabata Bundesen, Grumpy Cat wasn’t at all grumpy in real life. She had enjoyed the simple pleasures in life, such as hiding behind the curtains and playing with string. What’s more, thanks to Grumpy Cat’s (real name:  Tardar Sauce) willingness to lend her persona to various forms of online entertainment, Bundesen had managed to give up waitressing and home school her daughter. In fact, so willing had Tardar Sauce been to contribute to her family’s livelihood, that she had managed to amass more than $100 million in income over the course of her lifetime.

Bundesen recalls never having found out who had fathered Grumpy Cat, but the sourpuss was born at the family’s Arizona home on April 4, 2012. Aside from her human family, Grumpy also has a feline family member of her own. Brother Pokey doesn’t suffer from feline dwarfism, but did inherit the same loveable under-bite as his famous sister.

At the time of Grumpy Cat’s death she enjoyed the loyal fandom of 2.4 million Instagram followers and 1.5 million followers on Twitter, but even that didn’t raise a smile.

Enjoy the BEST of the BEST casino games online. Play to WIN now!