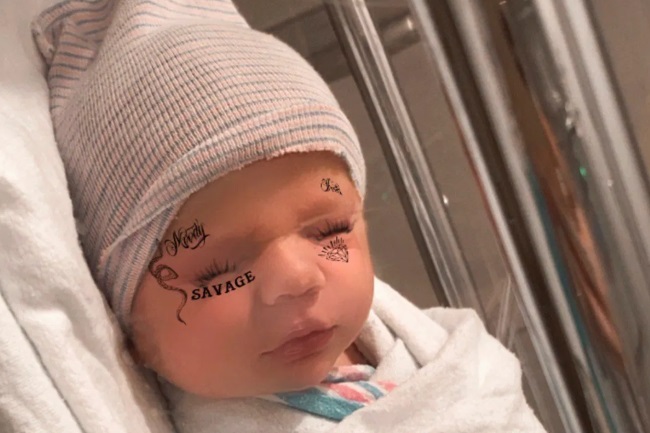 Elon Musk’s Canadian songstress girlfriend Grimes has given birth to a perfect healthy baby boy. Now, the name of the child, as divulged shortly after the birth by dad Elon has been questioned as it seems a bit odd. Not that “divulge” is the best choice of phrase either, because folks have been bending their minds out of cerebral ligament trying to come up with exactly how one was to go about pronouncing “X Æ A-12 Musk”.

Musk confirmed that the new baby was practically hours away via a social media post on Monday. This was after a fan had enquired about whether or not there were any new updates on the baby-to-be-born. Musk a couple of hours later updated fans with “Mom & baby all good” and it was at this point that he revealed the newborn’s seemingly coded name. The controversial tech billionaire then went on to share a photo of his new offspring, complete with a filter covering the little one’s face in tattoos, along with a rather lame reference to nobody ever being too young for ink.

Young X Æ A-12 is the couple’s first child together. Musk has several other children from his marriage to former spouse Justine Wilson. Fans were relieved to hear on Monday that all had gone well with the birth and that mom was also doing fine, especially since Grimes did not experience the easiest of pregnancies.

Grimes appeared to struggle particularly with being pregnant while wanting to keep working. In January she let fans in on just some of the hardships of working and carrying a baby, saying at the time that she could not help but feel as if she had been very poorly prepared for what pregnancy would ultimately mean to her and what it would feel like to be pregnant. She said that she thought that this was because pregnancy did not enjoy the public discussion time that it deserved.

She then quickly added that the unfamiliarity of the situation was probably brought on her own lack of understanding of the topic. Even though it’s been a good experience, wrote Grimes, it made working a lot harder.

Named After A Spy Plane

Grimes did however save the day, or at least to some extent, when she elaborated some about the origins of the famous couple’s newborn’s names. Her cryptic social media post referred to what folks now assume may involve the name of original code name given to the Lockheed A-12 fighter jet, namely Archangel.

The singer did not seem willing to let on much of anything regarding the meaning of “X”, and one can only surmise at the myriad of references that may or may not come into play right there. If one thing is for certain, then it’s that baby Musk’s name is every bit as cryptic as his famous father’s recent rant involving the sale of all of his possessions in a supposed act of rebellion over government’s “fascist” lockdown regulations.

What is Elon Musk’s real name?

How old is Elon Musk?

Where is Elon Musk originally from?

He was born in Pretoria in South Africa.