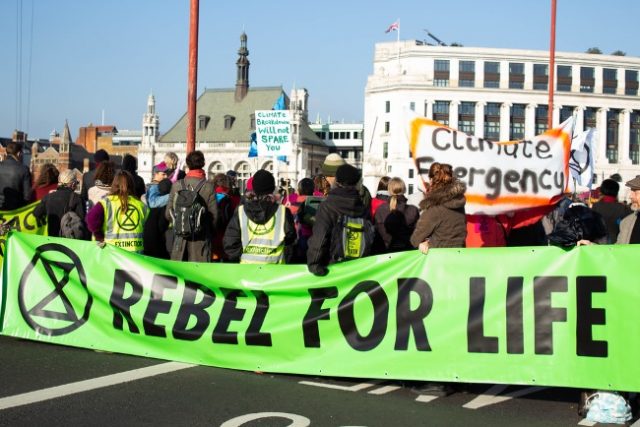 A London-based group going by the name of Extinction Rebellion (XR) is risking livelihood and legal limb in an attempt to awaken the minds of government officials as well as civilians to the fact that essentially, time is running out. Humanity is destroying the very system that keeps it alive and governments all over the world are doing absolutely zilch about it all. In fact, so convinced is the environmentalist world movement that earth is hopping along on its last limb, that its members are willing to be arrested for the sake of the cause.

Which is exactly what recently happened when members of XR blocked multiple bridges and roads in Toronto, Halifax, Vancouver, Ontario, Edmonton, Kitchener and Victoria. But why the drastic measure of bringing traffic to a halt in major cities? What exactly is it that justifies being arrested? Especially since the majority of those arrested and could be seen doing their thing on the country’s highways and by-ways appear to be not-you-typical environmental activist.

The How And The Why

Gail Bradbrook and Roger Hallam formed the movement on October 31st, 2018. Some may recall that this was in the immediate after-math of probably the most serious declaration ever made on a global intergovernmental scale about the future of humans and the planet we call home. It was at the time declared that world governments had not much longer than 12 years to stop a catastrophic series of climate control events the likes of which humankind has never before witnessed. This according to an intergovernmental panel report released on climate chance entitled Special Report Global Warming of 1.5 C.

The group’s symbols is that of an hourglass in a circle; an image that desperately wants to drive home the idea that time is running out. A sixth global mass extinction event is imminent, says XR, and if no action is taken now, it may be too late to turn the situation around.

XR’s demands are clearly formulated and directed at world governments:

Whether or not Extinction Rebellion will succeed in its cause is anyone’s guess, but what is essentially a positive development is that the movement appears to be steadily growing. So why then is this particular group so much more effective than any of its predecessors? Its simple, says University of Alberta associate professor Laurie Adkin; the human race is at the end of its rope.

Discover the THRILL of gaming on the GO. Play at Canada’s TOP mobile casinos!