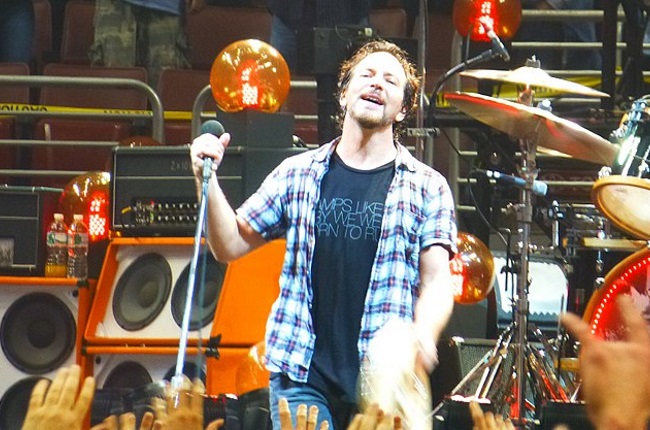 Pearl Jam frontman, main lyricist and lead vocalist Eddie Vedder is a man well-versed in the art of biding his time laying patiently in wait for that perfect moment of musical magnificence. And musical magnificence it was when the man behind hits like Man of the Hour and Given to Fly moved in behind a lone organ and performed a sole and soulful rendition of Pearl Jam’s River Cross during Saturday night’s One World: Together at Home benefit music event.

River Cross appears on the band’s Gigaton album but seemed to radiate something altogether different during Saturday’s performance. Vedder’s spine-chilling performance was delivered surrounded by candles and with the frontman dressed in a simple black shirt and black ballcap. But despite the lone man, his lone instrument and a simple deliverance leading up to a powerful finish in that well-known Vedder-wail, the message was everything but simple.

Vedder was trying to tell the world that all isn’t lost – not even in times of incredible distress.

So poignant was Vedder’s performance that One World: Together at Home curator Lady Gaga was clearly completely blown away. Gaga during Vedder’s performance of River Cross turned her own camera around and switched to selfie-mode, thanking the artist for his contribution.

But Lady Gaga contributed to the show in her own signature-style way too with a moving delivery of her cover of Smile on her piano at home. The superstar addressed the millions of viewers who had tuned in for the streamed event from around the world, saying that she felt honored to be a part of the special benefit event hosted in honour of the thousands of medical workers putting their own lives on the line in order to selflessly try and save the lives of everyone else.

Gaga Shares Her Why

Gaga then went on to say that she was also thinking of everyone who had tuned in to the performance from their homes around the world, people who she could only assume was wondering when things were going to be “different”. She wanted to give those tuned in the permission to smile, said Gaga, if only for a moment.

The at-home concert, curated by Lady Gaga in collaboration with the World Health Organisation and the Global Citizen, has now raised more than $150 million for the benefit of health care workers all over the globe. The two-hour televised concert, performed virtually by each individual participating artist at home, made a firm point of not asking for any donations from private viewers. All of the money raised came from the pockets of big corporations and philanthropists.

The idea, said Gaga, was not to solicit money from viewers but to instead allow viewers to freely celebrate those fighting for global health on the very frontlines of the world. Gaga and Vedder were joined by the likes of The Rolling Stones, Paul McCartney, Celine Dion, Keith Urban, Billie Eilish, Taylor Swift, and many others.

All donations pledged and received will be paid to the Solidarity Response Fund of the World Health Organisation.

What did Eddie Vedder sing in the One World Together Concert?

What message was Eddie Vedder hoping to convey with River Cross?

A message of hope.

Who took part in the One World Together Concert?